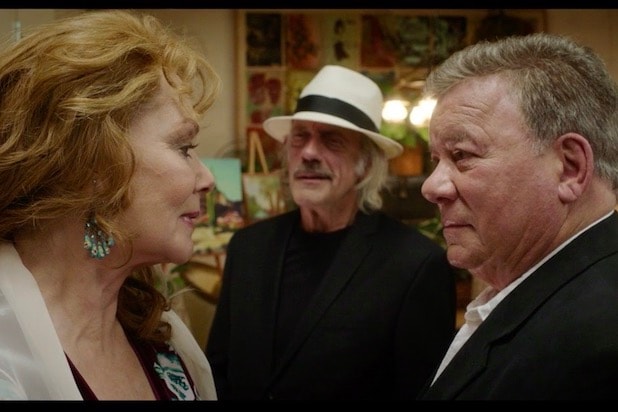 The last time moviegoers visited a certain California desert mecca, in 2020’s Palm Springs, the only thing that changed for two wedding guests stuck in a time loop was their feelings for each other.

True to its title, this genial exercise in audience-pleasing never rises above its modest expectations. Then again, like its golden-age protagonists, it doesn’t have much to prove.

Take former Air Force and NASA flyboy Maj. Victor Martin (trusty, blustery William Shatner). His days in the cockpit may be over, but he’s never lost his zest for piloting sports cars and ogling bikini-clad babes.

That is, until Victor loses his driver’s license, after one too many outrageous driving infractions — and a crusading district attorney determined to defuse the “ticking time-bomb” of irresponsible senior drivers like him.

Riding the bus may be “for losers,” as he complains, but at least it sets up his inevitable meet-cute with someone he might never have encountered otherwise: Caroline Summers (sensitive Jean Smart).

But first, a few mild comic complications must ensue.

Some involve Victor’s attempts to pass a driving test and regain his license.

Others revolve around Victor’s perceived conflicts — one with a dashing artist (Esai Morales) who’s close to Caroline, the other with a young low-rider driver (Carlos Miranda) who definitely appreciates Victor’s vintage Porsche, if not the old fogey who owns it.

Screenwriters Kurt Brungardt and Christopher Momenee maintain a broad, breezy tone, even with potentially poignant topics. (As when Victor admits, “I’m still trying to figure out what I’m going to do when I grow up.”)

Director Giorgio Serafini keeps Senior Moment tooling along like a retiree in a golf cart: not fast, but steadily and on track.

But it’s an undeniable pleasure to see such old pros as Shatner, Smart and Christopher Lloyd (as Victor’s lifelong pal Sal) make the most of the movie’s modest moments.

Senior Moment may be the cinematic equivalent of comfort food — sweet and palatable, if not much nutritional value. Still, if you have a taste for it, enjoy.