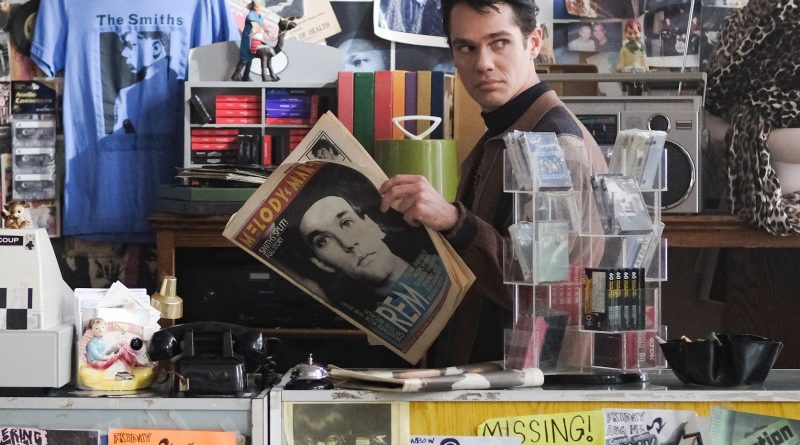 Some of us remember a time when the radio was our primary access to music, buying albums in a record store, listening to deep cuts with friends, and recording mix tapes on actual tape…cassette tapes. Music was a way to connect and perhaps to even see the world in a way we had never imagined or to learn that we are not alone with our thoughts and feelings. And everyone also remembers, no matter your age, how confusing a time it is to be a teen. Shoplifters of the World takes us on a musical journal set in 1987, album by album, walking in the footsteps of five teens one night as they are connected and guided by The Smiths, a legendary British group who had the audacity to disband.

Helena Howard stars as Cleo, a young high school grad who is in a dead-end job and floundering in life, watching her disconnected mother list away on diet pills. Adding insult to injury, she learns that the band she lives for, The Smiths, has broken up. Her weekend of celebration with friends to send off her friend Billy (Nick Krause) to boot camp now heads in a different direction, all equally upset by the news about The Smiths. Despondent and disheartened by the all too apparent fragility of their future, gives way to a multiple storylines all connected by the thread of this band and its impact on their lives.

Dean (Ellar Coltrane), an outcast of the group, always looking in but never allowed to enter, is a music store clerk who allows Cleo to steal cassettes in front of him. Seeing how the news of the band has effected her, he attempts to be her knight in shining armor and rides in to the local heavy metal radio station, KISS 101 (didn’t every town and city have a KISS 101 back in the day?). Dean hijacks it and demands at gunpoint to have the remainder of the evening play only The Smiths.

The story slowly unfolds as we get to know each of Cleo’s friends; Sheila (Elena Kampouris) who lacks self esteem and is in love with someone who can never return her feelings; Patrick who struggles with self identity; Billy who is in love with Cleo; and Dean whose life also revolves around this unobtainable and mysterious young woman. Broken into chapters or in this case album titles and sides to help the viewer prepare for what’s to come, Shoplifters of the World becomes an homage to The Smiths as it attempts, sometimes successfully and too many other times, painfully not, to determine which way they will turn at their individual crossroads of life.

Set in the iconic fashion era of 1987, a time where big hair and gobs of hairspray, shoulder pads, loud lipstick, goth, and bold colors will forever be emblazoned on many yearbooks and photo albums, director Stephen Kijak hits all the right production design notes. The disharmony, however, strikes as these young socially awakened and politically aware teens sound more like 50 year-olds looking back on their youth. Co-writers Lorianne Hall (story) and Kijak create characters with incredible self awareness and wisdom with eloquently wise dialogue that just doesn’t ring true, with the exception of Dean and DJ Full Metal Mickey’s (Joe Manganiello) story. Mickey, being held at gunpoint by Dean to play The Smiths to his counterculture listening audience, begins to break down the emotional barriers and find a common place of understanding. Dean taps into his own disappointments while Mickey looks back on his life’s mistakes hoping to impart words of wisdom upon this young man. While Dean and Joe are not the focal point of the film, the performances and interactions make me wish they were.

Perspective is what seems to be missing or glossed over in Shoplifters of the World. We never get a sense of whose eyes we are seeing this pivotal night. And because this point of view is ever-shifting or non-existent, the connection and identification with the characters is lessened. We also see that the emotional level of Cleo remains at constant, never really changing, which buffers the viewer from gaining insight even when seemingly momentous events are unfurling. Shiela, Patrick and Billy all have an eye-opening events occur forcing them to look in the mirror and see their reflections, but again, there is no variation in emotion. And when you’re talking about teens and early 20’s, life is an emotional roller coaster ride as you hang on for dear life.

Thankfully, the side story of Dean and Mickey allows us to be flies on the wall, witnessing the effects of the brutality of high school as Dean come to terms with his life and situation. We understand his frustration with the goddess he worships, and he evolves; he begins to see things differently thanks to his strange new radio station companion he holds at gunpoint. Mickey, effortlessly portrayed by Manganiello, whose rough exterior quickly washes away, reveals a character who is more complicated than we had expected, providing us insight and finally, a character with whom we can connect.

However, make no mistake, Shoplifters of the World reminds us of the power of music. Music time-stamps many events for each of us, bringing us emotionally back in time. These indelible images of not only where we were but how we were are all created by music as it carves out its own space in our heads. Synapses fire, shooting messages to every portion of the brain allowing us to re-experience times gone by or maybe even thought to have been lost. Mine is Rock Lobster, one of the few times I went to a party in high school and hung out with “the cool kids.” (I was not one of them.) I hear that song and I am transported back to the ranch house with short shag carpet, the lights down low, people dancing and singing the lyrics as we all melted into the floor, just as the words dictated us to do.

Being a teen and asking those questions of who we are and who do we want to become are the underlying themes of Shoplifters of the World as each of the characters struggle with identity, gender, or sexuality itself. These issues are blatantly laid out for the viewer to assess, but those wheels begin to spin, getting stuck in its own rhythm like a needle on a record player hitting a scratch. Ultimately, the film finds too many dissonant stories and becomes relegated to being just a movie for fans of The Smiths.