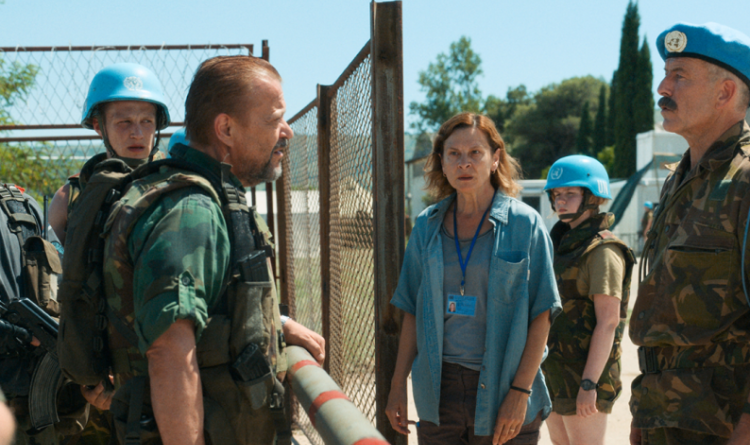 Produced and directed by Bosnian filmmaker Jasmila Zbanic, Quo Vadis, Aida? unfolds during the bitter, three-year dismantling of the former Yugoslavia, defined by brutal conflicts between the country’s Serbian, Croat and Bosnian residents who were divided on multiple fronts with religion often coming to the forefront and pitting Catholics, Muslims and Eastern Orthodox Christians against each other in the mid 1990s to horrific result.

Set primarily in the Bosnian mountain town of Srebrenica and rooted in grim historical reality, Quo Vadis Aida?’s core is the story of schoolteacher Aida Selmanagic (Jasna Diricic), who’s married to fellow educator Nihad (Izudin Bajrovic) and the mother of Hamdija (Boris Ler) and Sejo (Dino Bajrovic)–teenagers on the verge of manhood when their hometown becomes a frontline in a brutal civil war.

The film opens with Aida–loosely inspired by real-life (male) United Nations interpreter Hasan Nuhanovic–already ensconced in a new role: Since she’s fluent in English she’s become the de facto translator for UN peacekeepers charged with trying to keep the brakes on what is a clearly runaway train. Declaring Srebenica a “safe area” doesn’t make it so, and the fact that the town is increasingly cut off from normal supply lines and inundated by refugees from other besieged areas makes the situation increasingly dire. From the moment United Nations forces evacuate thousands of men, women and children from their homes and herd them into a camp with no toilets or privacy and lacking adequate supplies of food, clean water, medicine, threatened by Serbian military forces and surrounded by miserably crowds of displaced persons whom the UN guards are charged with keeping outside the stage is set for disaster. And disaster ensued, culminating in the murder of more than 8000 civilians, many buried in unmarked mass graves… which is grim history, not a spoiler.

Quo Vadis, Aida is driven not so much by the horrors (though there are horrors aplenty) as by Aida’s desperately focused, relentless determination to find a way to save her husband and children while still doing her job, one that affords her just enough agency to make its limitations salt poured into an open wound. Veteran actress Diricic’s performance is phenomenal; her husband, actor Boris Isakovic, is equally strong as brutally posturing Serbian General Ratko Mladic, convicted of war crimes for his part in the Srebenica massacre. It would be comforting to think that films like Quo Vadis, Aida? are important as reminders of terrible things past, but their real value is as warnings, a notion evoked by the film’s final scene in which elementary school children perform a little dance for their parents and teachers–including Aida–that concludes as they alternately cover and uncover their eyes. It’s not subtle, but it works.