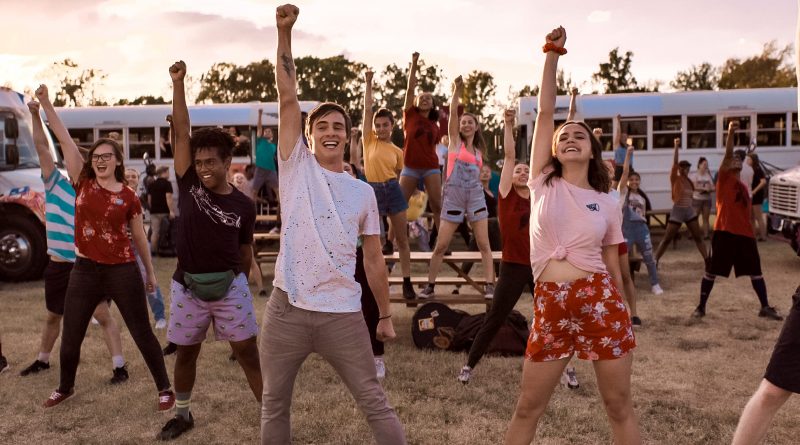 A Week Away is a sweet, unpretentious musical about a Christian summer camp for teens, told with heart and verve. Bailee Madison, who plays Avery, the daughter of the camp director, co-produced as well. Kevin Quinn plays Will, who is only at the camp because the alternative was going to juvie, Kat Conner plays the bookish Presley and Jahbril Cook plays George, the sweet, shy camper with a crush on her.

Nell Minow: Bailee, I want to start with you. How did you become a producer and what did that mean?

Madison: Oh, it means so much. I fell in love with the story before I knew I was going to get to share my heart behind the scenes as well. The entire team was just the loveliest to me. It was a no-brainer, yes, for me because it did feel like my heart had so much that I wanted to give, because I cared about this movie so, so much as a whole. I was 19 years old at the time, and I feel as if they gave me a space in an environment in which I could truly find my voice and feel comfortable using it. I will forever be indebted and so grateful to the team. It’s been the best little roller coaster of a ride and it hasn’t stopped since the cameras stopped rolling. The last three months it’s been now introducing over Netflix, working with their team and cutting trailers for the first time, and working on posters. It’s been so fulfilling, and genuinely it feels like a little slice of something personal for me that I get to have that’s not so much so public or so flashy. It’s a moment that I get to appreciate. And I feel incredibly humbled in that. Very, very, very thankful.

Minow: Bailee and Kevin, both of your characters have dealt with loss, but responded in very different ways.

Quinn: I think where we see Avery in her journey with grief and loss is that she’s taken the time to address it, to accept it, to understand what the grief was. I don’t think Will has had that journey. Where we meet him at the beginning of the film, thinking back to these flashbacks of him with his parents, it’s something that he swept under the rug for so long. And camp A Week Away is really an opportunity for him to finally address those things that are imperative to his arc as a character.

Madison: Avery was fortunate to have a dad that she could lean on who was also dealing with the same loss. Will is incredibly isolated and away from every sense of warmth that he could have ever known. He had no one to really take a second to look at him and see him. He was always on the road and always traveling. So, I think what makes their connection so beautiful is that Avery is like, “Hey, I see you, you know what I mean? I feel your pain. I see you, I’m with you. And I can’t imagine how hard it must be for you because I’m still struggling with it. And I still have all this love behind me and all this support. But I still feel like I can’t let my guard down so I’m going to give that to you.” It’s a really beautiful thing showing two people dealing with grief in two different separate ways and then connecting through the idea of needing to lean on someone and not wanting to feel alone and wanting to find that home in a human being. That’s one of my favorite parts about their love story.

Minow: The characters pack a lot of activities into a week! Which was your favorite?

Quinn: There was a day that we were filming a montage of sporting events around the camp. And we did everything from bag toss to pie-eating contest, to tug of war. And I think that was the most fun for me because I actually forgot that the cameras were rolling at one point, which is a good day in any actor’s career. We’re just having fun.

Madison: We were drained that day. I remember when we were finished filming, we were like, “I’m exhausted.” And then I went home and I was FaceTiming my mom and I said, “I’m so tired today. She asked, What did you do?” When I told her, I thought, This just sounds like a really fun day.” And it was. But yeah, we got really into it.

Conner: The scene was cut from the movie but we got to do a zip line, and that is one of my favorite things ever. But we only had one take. But if I could go back, I want to do it again.

Cook: Yeah, that was super fun. There were a lot of things that we didn’t get to do, that showed up in the movie but we didn’t get around to it. One of them in the dive sequence George gets launched off The Blob [inflated raft] and I was looking forward to that the whole time. The Blob was just out there on the lake and we could see it every day. But then on the day, unfortunately, they hit me with the bad news. They said, “Doing your hair is too much of an ordeal so you can’t get it wet because we don’t have time to do it again.” And so, I climbed out onto The Blob, and I had to do this shimmy maneuver on the big wooden structure to get the shot and then I had to shimmy back off without getting wet.

Minow: Kat and Jahbril, like a lot of teens, your characters have a lot of trouble getting their relationship off the ground because they are shy. What tips would you give them?

Conner: I think my tip is, just go for it. I’m a little bit bolder than Presley. I think you’ve got to establish that dominance and go for it.

Minow: It must have been a lot of fun to have so many kids in the film. What kinds of things did you do for fun?

Conner: Well, the producers and our wonderful director Roman White made sure that there were activities for us. We got to do a couple of cast bonding nights at Roman White’s house. We would go over to his house and he’d order us Chinese food and we’d eat and watch a movie and have a really fun time. And then they surprised us with tickets to Dear Evan Hansen. And so, they took us to dinner and we got to see that together, which is really special.