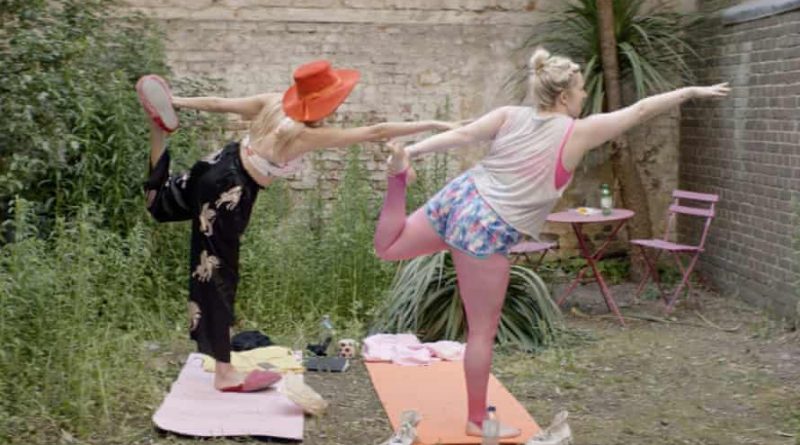 Star, writer and director Greta Bellamacina has made a lengthy, pretty film, Hurt By Paradise, that accomplishes two things. It will make the well traveled viewer miss London terribly, especially the glorious spring and summer months. It also reminds the viewer how important it is to have a close female friend at the ready, one who is always there for you.

The film sits squarely on pretty and fey Celeste (Bellamacina), a single mother slash poet who is trying her best to get published, and her good friend and nearby neighbor Stella (Sadie Brown), the chirpy and delightful actor-slash-babysitter and confidante to Celeste.

The poetry that Celeste writes earnestly in hopes of a literary career is not grabbing anyone, and even her pal Stella lives in mortal terror of Celeste’s occasional, ‘let me read you a few verses…’ conversation starters.

Stella is forever trying to get Celeste to pay up for the on-call babysitting and odd purchases made for the baby. The two are trying to get their art taken seriously, which is not easy to do when a toddler is bounced between them.

Told in chapter and verse style, the story is an organized timeline of lives of the two besties. Stella is chasing more than an acting dream, she is also embroiled in a passionate online affair with a mysterious “Roman” where no photos have been exchanged. Celeste is trying her hand at dating as well, and winds up with a rather dull pilot who gives the impression he’s not desirous of being encumbered with Celeste’s complicated life and small child.

As films go, there are standout below the line efforts. Kudos to production designer Isabella Bruno who constructs a believable and bohemian world where Celeste lives, as well as her narcissistic artist mother’s funky flat.

Celeste has been trying to locate her dad for years. And discovery of her missing father is the twist in the tale that makes for forgiving and moving on. She wants answers, and then again, maybe she doesn’t.

Meanwhile, Roman (Bruno Wizard) and Stella’s torrid texting romance culminates in a tryst in the worn at the edges faded beauty of seaside Margate.

Bellamacina does a good job of showing how the life of a single mother gets in the way of many aspects of normalcy, especially finding a love interest. We are shown the brutal side of rejection, English style, served up with tea and politesse.

Hurt by Paradise is a long, long look at the frustrations of being an artist, being a mother, and being a daughter of judgmental and difficult, damaged people. If not for her funny and charismatic solid bestie, Stella, Celeste would be at “sixes and sevens.” Mysteriously, Celeste can afford to pay her rent, buy food and clothes and not be the starving artist she likely is based on the reaction to her solipsistic poetry in the commercial world. Her tether to real money appears to be her pretty sister who married well and provides private health insurance for her and the baby.

There is a shock twist we will not reveal, but patience to get there in this slow boil of a female buddy film is required. The film does great justice to Sadie Brown especially, as she is a delight and we hope to see more of her in future projects.

The tertiary roles are real winners too. Look for Jaime Winstone who is cast as Janette, a campy thrift store psychic, and Camilla Rutherford as Estelle, the sultry and enigmatic proprietor of a seaside hotel where Sadie plans to meet up with Roman. They are wonderful shots of comedic energy in this torpid narrative made engagingly watchable by the talented DPs, Fabio Paleari and Emily-Jane Robinson, who dish up parts of London and the southern shores of England in a quirky and charming visual feast.