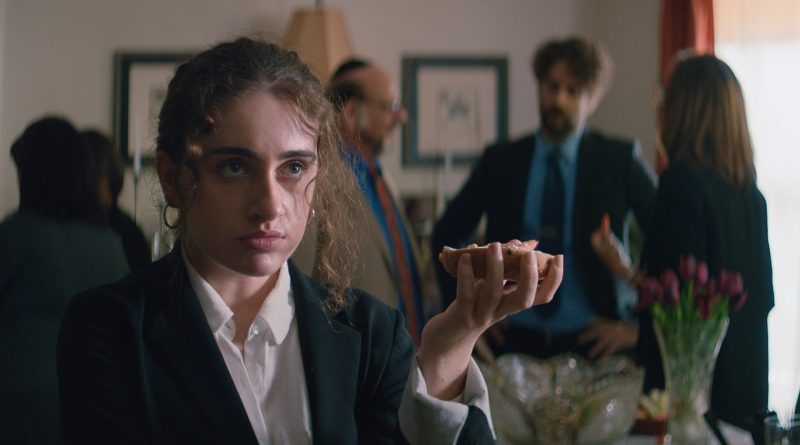 Watching college student Danielle endure a shiva that becomes her personal hell in the comedic drama Shiva Baby will trigger sparks of recognition in anyone who’s lived through similar gauntlets. Weddings, reunions, and even funerals often have that surface interaction with people we haven’t seen in ages and various insecurities underneath.

For Danielle (Rachel Sennott, TV’s Call Your Mother), that means pretending to her parents that she has a babysitting job but asking, “What’s my soundbite again?” before entering this gathering for someone she barely knows. There are other familiar faces, though: Maya (Molly Gordon, Booksmart), a friend from her youth turned ex-girlfriend, is there with her mother, bragging about Maya heading to law school. Also attending is Max (Danny Deferrari, TV’s Madoff), the sugar daddy that Danielle just had sex with that morning, not knowing he was married. He’s also a new dad, which Danielle realizes once his wife, Kim (Dianna Agron, TV’s Glee, Novitiate), arrives with their baby girl.

Writer-director Emma Seligman makes her feature debut with Shiva Baby, which she expanded from her 2018 short film. She aptly captures Danielle’s claustrophobia through frequent close-ups framing her like she’s trapped and chitchat that feels like a cross-examination. (The strings-heavy score by composer Ariel Marx of The Tale would be right at home in a horror movie.) Danielle seems to be majoring in gender studies, but none of her parents’ peers thinks that translates to a job. “So, you can run marches with the pink pussy hats?” one asks.

Danielle isn’t quite sure what she wants out of life, either. Sennott shows her flailing around for an escape hatch while trying her best to handle these colliding parts of her life. She bickers with Maya, toys with Max, and distracts herself by helping the hostess. She also flings passive-aggressive arrows at Kim, a successful entrepreneur, to the point that Maya observes she’s being a little too misogynistic considering her feminist beliefs.

Some viewers might consider the one-upmanship and Jewish flavor a little thick, like a slab of cream cheese. But there’s humor and affection here, too, notably from veterans like Fred Melamed (TV’s The Good Wife, WandaVision) and Polly Draper (Obvious Child) as Danielle’s parents, Joel and Debbie. Debbie loves her daughter, noticing Danielle’s real pain about feeling like a disappointment, but she doesn’t know what to make of her bisexuality. At one moment, she tells Danielle “no funny business” with Maya, and in another acts like she’s cool, saying she herself lived through New York in the eighties. The rest of the cast is enjoyably strong. Gordon flits believably from anger to caring while Agron is both flinty and sympathetic, deflecting and deciphering Danielle’s pettiness.

Confined largely to one setting, Shiva Baby has a few lulls in pacing, similar to a real-life get-together. But like its seemingly aimless protagonist, it continually surprises, eventually finding its way.