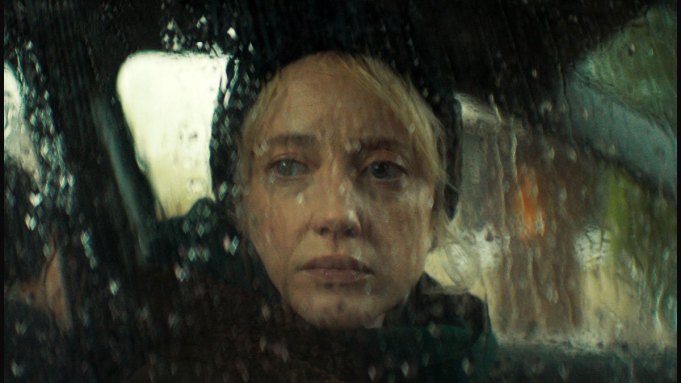 Writer/director Stacey Gregg makes her narrative feature debut with Here Before, which takes place in a small town in Northern Ireland, and is about a grieving mother Laura (Andrea Riseborough) who finds in the new next door neighbor’s daughter Megan (Niamh Dornan) echoes of her own child Josie, lost several years before in a car accident. Megan and Laura begin a complicated relationship filled with awkward, unsettling conversations and inappropriate attachments. All the characters in the film make questionable choices, for reasons that only become clear as this slow burn of a story that offers strong, well-defined characters, packs lots of surprises and keeps you in thrall to the last scene of the film.

I asked a few questions of both the star, Andrea Riseborough, and the director Stacey Gregg, who hails from Northern Ireland herself, about working to bring this fascinating story to the screen:

Leslie Combemale: Stacey, you said in your director’s statement you grew up around trauma. Without revealing anything specific, how did that impact how you wrote the character of Megan, and, as she is still a child, did the actor Niamh Dornan, who portrayed Megan, nuance those words in ways that surprised you? Stacy Gregg: Certainly for me, growing up in Northern Ireland in the 80s and the 90s, this whole landscape is a landscape of post traumatic stress. Looking around for me, as a child, I was surrounded by strong women and how they navigated often that trauma and grief and the sort of stoicism that I witnessed and the hard or tough love that I witnessed was formulated in me as a little girl who wasn’t that dissimilar in a lot of ways to Megan. Imagination is an escape, and mischief is an escape and being precocious is a gift and a burden and rather fantastically we found a lot of those qualities in Niamh our actress and she was incredible in so many ways.

She didn’t come to us with a lot of experience, but she came as an open book. She’s so smart it’s almost unnerving. She certainly has that quality. She also had quite a bit of sass as well. She was always great to be around but super professional as well for one so young. In that sense she definitely brought the smarts and the precociousness, but also when she sat still, she had this impenetrable quality where you want to get in her head. That match between Laura and Megan felt so palpable and a gift that kept giving and I think that’s very clear in the film.

LC: You also allowed silence and awkward moments in the scenes between Niamh and Andrea. Were there discussions around that kind of space?

SG: The script was quite spare and the way we shot it was very lean. I wanted to feel and see things rather than be told them. Negative space and the presence of absence was a real guiding star through the process both in terms of design and in terms of how we were feeling these energies unravel between these characters. My preference when I’m working is not to tell an audience or spoon feed an audience but to create a space and allow the audience to fill that so that was intentional.

Andrea Riseborough: To appreciate silence as power you have to appreciate a sense of rhythm. Essentially this is a film made my filmmakers and people who understand theater and literature. The script was so beautiful and the spaces in between were so important, and I think they trickled off the page when you read it. Other than the kids, who came to it in the most beautiful and innocent way, we were working with a lot of seasoned theater and film actors. It’s such a pleasure to be surrounded by such technical brilliance, where people understand the power of the silence as much as they understand the weight of the words.

LC: Andrea, you seem drawn to roles where the character has ambiguous intentions or an unclear understanding of themselves. Those are often the most interesting roles for women, and I’m sure that’s in part what attracts you, but how do you determine how to internally walk that line of ambiguity as an actor? AR: I’m interested in playing real people, and realistic portrayals of human beings. I think we are innately confused about our identity and our purpose. Our motivations are so often ambiguous so what draws me in is brilliant writing and a great vision. Those are the two things that support a well-rounded character or rather a well-rounded human being. In the cinematic language of character there are stereotypes that it’s very easy to lean toward when writing a screenplay, which I find less in really brilliant film and really brilliant theater, and even sometimes now in episodic television. So I’m always looking for a fully formed human, or not, as the case may be.

LC: In terms of this character how did you embrace her duality?

AR: She’s going through the process of grief. The real duality lay for me in the fact that she is surrounded by community but yet she’s still completely isolated in her grief. She so wants to reach out and express it but she doesn’t want to burden anyone with it. She’s not satiated by the collective grieving she’s doing with her husband. He very much wants to move on, and she wants to move on. They’re both moving on in that they are dutifully raising their son who is very much alive. There were so many different parts of this woman who is really just putting one foot in front of the other and surviving. Not just surviving, but also laughing and thriving. There are moments where she’s so humanly positive in the depths of that grief. I think that’s what I’m drawn to.