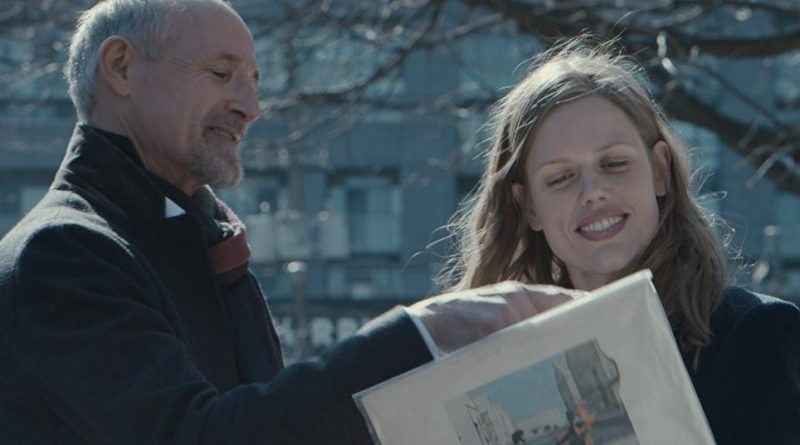 Sometimes, a girl has to do what a girl has to do just to survive and, perhaps, make her dream come true. That is the case with Sugar Daddy’s Darren (Kelly McCormack), a struggling 25-year-old free spirit who aspires to become a musical artist. But her lack of funds forces her to take odd jobs such as a caterer just to make ends meet. After she is fired for sneaking food into her backpack, however, Darren decides to become an escort for older males who just want a female presence when they go out to dinner.

Darren’s pals support her pursuits, but aren’t so sure about her allowing lonely men to buy her fancy outfits to wear to classy joints where they wine and dine her for a fee. There is an unspoken promise of no sex but it pays enough that she can purchase an odd electronic keyboard instrument to accompany her rather ragged yet intriguing vocalizing to lyrics she makes up on the spot.

She meets a female friend of one of her clients, an owner of a record label who allows her to audition, but her oddly angelic singing style doesn’t quite fit the bill. Her roommate Peter confesses he has feelings for her, but she shrugs him off. But when Darren finally tells her other friends how she is making a living during her birthday celebration, they turn on her and accuse her of prostituting herself.

But when D’s main source of income, a wry businessman sensitively portrayed by Colm Feore, provides an offer she can’t refuse, she can finally dedicate herself to a music career and perhaps fulfill her destiny. McCormick, who wrote the script, strings together a series of roadblocks for her character along the way but doesn’t always fully fill in the narrative blanks. But first-time director Wendy Morgan knows how to use her charismatic star’s physicality, intense eyes, lithe body, plush lips and pale beauty to make a powerful pro-female statement. That includes a crew that boasts female producers, editor and cinematographer behind the scenes.

When Sugar Daddy opened the 20th edition of the Whistler Film Fest last December, its Vancouver-based leading lady had this to say to Variety: “This film is also very wildly un-Canadian in term of its sentiment and its lack of politeness.” McCormack added that she hoped it would be warmly received by “a global audience….As Virginia Woolf famously said: ‘A woman has no country.’ ”