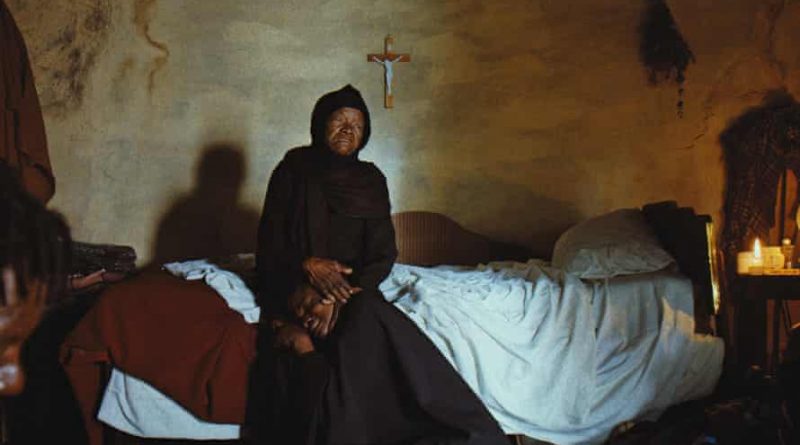 This Is Not a Burial, It’s a Resurrection finds a distraught widow contesting a dam.

Some directors grasp the concept of film art. To that esteemed group I now add Lesotho filmmaker Lemohang Jeremiah Mosese. His This Is Not a Burial, It’s a Resurrection confronts a familiar problem. The exquisite presentation is anything but typical, from the dialogue to the sound, the compositions to the community interaction.

In her last film appearance, the late Mary Twala Mhlongo plays Mantoa, eighty-years old, “her mouth bitter with the taste of death,” as the on-screen storyteller relates. Her son has died, her husband lies injured, not eating or moving. Mantoa’s unforgettable, weathered face carries the legacy of her years in the Lesotho village Nasaretha. Ancestors lie in the nearby cemetery, the land provides for farmers who plow with oxen, plant, hoe, and harvest. And then they learn from their representative that a dam will flood the entire area, all residents resettled.

Mantoa protests with the confidence of her wisdom and with inhabitants’ support. One man whose father helped cut down the forests says, “What they call progress, it is when men point their damning finger at nature and proclaim conquest over it.” Politics, the impact of Christianity, and traditional practices commingle in the unfolding, rich narrative. Mantoa envisions hazy dreams that rumbling backdrop sound intensifies. At other times, ominous low tones complement tragic turns of fortune as the community gathers, sings, and confronts a dire future.

With lighting reminiscent of Rembrandt, cinematographer Pierre de Villiers sculpts scenes that embrace the characters in dramatic compositions. Events progress at a measured pace that feels exactly right, all of this an homage to the poetry of their lives. Winner of the 2020 Sundance Special Jury Prize for Visionary Filmmaking and the African Academy Awards for Best Director, Best Cinematography, and Best Actress, in Southern Sotho with English subtitles, This Is Not a Burial, It’s a Resurrection is offered by Dekanalog.