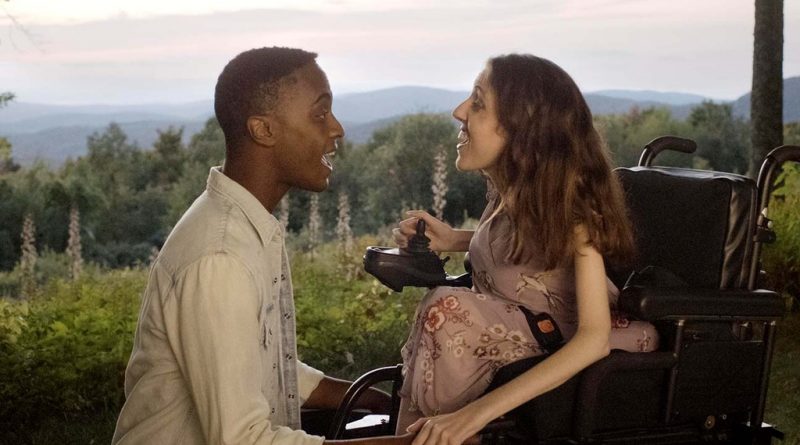 Imagine some truly optimistic folks just deciding to make a movie musical that has a message of love and inclusion with a cast and crew of people with and without disabilities. Now imagine someone giving them the money and the end result is a weird and delightful tossed screen-salad of Crip Camp and High School Musical, with a side of Grease, where no one mentions the disabilities, and there is truly authentic disability representation. That is the joyful, refreshing Best Summer Ever, which is filled with high school cliques and mean girls and jocks, but some, for example, are walking, and some are in wheelchairs. The student body represents a wide variety of kids with disabilities and without, but they all have the same high school pressures and drama. The question isn’t ‘why does this movie exist?’, but rather, ‘what took so long?’ and ‘why aren’t there more like this?’

Sage (Shannon DeVido) and Anthony (Rickey Wilson) fall for each other at a summer dance camp, only to part until the following year. but wait! A series of mishaps lands Sage at the same high school as Rickey, who lied about being a dancer from New York. He’s actually the football star in a small town obsessed with the sport, and he is in the closet about his love of dance. Surrounded by cliques, an evil cheerleader, and Sage, who harbors her own family secret, will Anthony reveal his feelings to his sweetheart, and his love of dance to his team? We’ll find out 8 songs, lots of movie homages, some fun cameos, and a few plot twists later.

The whole idea for Best Summer Ever began at Zeno Mountain Farm, which hosts 12 different retreats and camps at their home base in Lincoln, Vermont. In 2005, they had a film camp, which made movies featuring people with disabilities that were not focused on the disabilities themselves. The films were a hit, and they started having screenings that became fundraisers for future film camps. In 2012, they were approached by director Michael Barnett to make a documentary about their upcoming western Bulletproof, which became the award-winning Becoming Bulletproof. The success of that film inspired a desire to make a narrative feature film, and because all involved loved American teen musicals, Best Summer Ever, 2 years in the making, became a reality, debuting at SXSW 2020, and played again at SXSW 2021.

Like Judy Garland and Mickey Rooney and their “let’s make a Broadway show in the barn” mentality, there’s no question Best Summer Ever is a labor of love for all involved. Most of the cast and crew are moonlighting from their other life roles, or juggle multiple duties in the production. Co-director, producer and writer Michael Parks Randa helped edit the film and plays a small role. Peter Halby, co-director and founder of Zeno Mountain Farm in Vermont, wrote all the original music and lyrics for the songs, aided by musician/actor and self proclaimed ‘queerdo’ MuMu (aka Madeline Rhodes), who also plays cheerleader mean girl Beth. It’s all in the family though, because Peter’s wife Ila, his brother Will Halby, and Will’s wife Vanessa, are all co-founders of Zeno Mountain Farm, and also executive produce. Will shares a screenwriting credit with producer Andrew Pilkington, who has written, directed, and produced four full-length films, and is head of Zeno Films.

For the music, Mumu and Peter Halby partnered with multi Emmy-winning composer and NYU adjunct Film Music professor Jamie Lawrence, who created music and the score. In addition to a co-producing, writing, and casting credit, Terra Mackintosh plays Principal Donna. Another producer has an acting roles in the film, and one acts as First AD. The choreographer Frances Orr is also the second unit director. It seems nobody in crew had just one job.

One nice touch in Best Summer Ever is the cameos that pop up from time to time. Benjamin Bratt and his daughter Sophia make a brief appearance, as do Maggie Gyllenhaal and Peter Sarsgaard, in several nearly blink-and-you’ll-miss-them moments. Bratt, Gyllenhaal, and Sarsgaard, as well as Jamie Lee Curtis, Amy Brenneman, Ted Danson and a host of other big names are producers on the film.

Both realistic and aspirational, Best Summer Ever is the sort of movie that may be fun and frothy, but it’s also needed in order for bigger studio films to consider more inclusive casting. If the majors never follow suit even a little, this film still demonstrates talent and expertise from people with disabilities we often don’t get to see, and certainly not without involving self serving storytelling and calling attention to itself. Here’s hoping it gets the notice it deserves, creates change, and lots of future opportunities for its cast and crew.