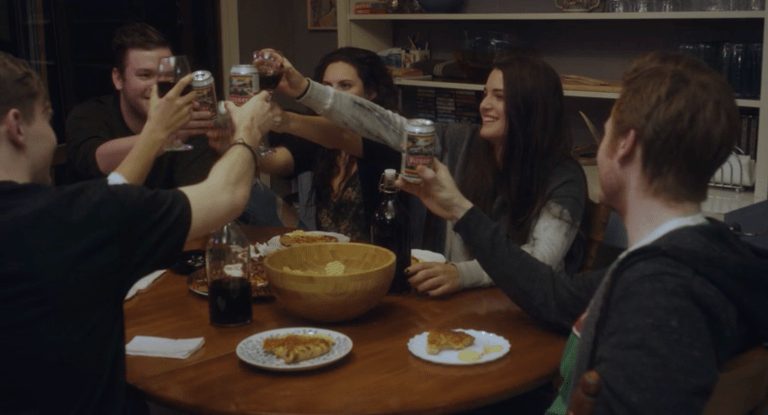 2020 was a cruel year for film’s planning to release during the pandemic, and even crueler for low-budget indies that had just started what is an already challenging journey in gaining visibility in a market where the bigger named and bigger funded projects will always be a default setting for the limelight. Dionne Copland’s Cold Wind Blowing is a case in point; initially getting positive response from one of the biggest indie fests in the US, the unparalleled shake up the film industry faced in 2020 saw this film almost fall off the radar.

Almost. If it weren’t for festivals like Salem Horror Film Festival and the Women in Horror Film Festival picking the film up (two of the most underrated yet important genre fests in the United States right now, by the way), this curious little horror treasure might have risked never seeing the light of day.

Australian-Canadian actor Angela Ways is the film’s central anchor as Nomi, a young woman who has decided to shun the heavy emotional battleground of her recently divorced parents during the Christmas season by inviting a group of friends along with her younger brother Thomas (Cameron Peterson) to her family’s cabin in Cypress Hill in Canada’s Saskatchewan province. Nomi is putting her heart and soul into having a perfect festive season, but her brother is blind to everyone except the girlfriend with whom he is besotted with, and sexual betrayals and secrets complicate the interactions between the others – Nomi included – which make her fantasy of egg nog and carols around the fire seem like an impossible fantasy.

Added to all of this is a strange creature in the woods surrounding the isolated cabin that increasingly wreaks havoc, leading to the film’s climactic action as the happy Christmas getaway takes a turn towards the worse. It is here we find one of the film’s greatest strengths; while the horny-teens-in-an-isolated-cabin trope is hardly reinventing the wheel, what struck me most dramatically about the film is the raw, sincere authenticity of how people actually react when faced with a crisis. Part of the fun of horror so often stems from an economic elision of the nuts-and-bolts way we react when our friends get hurt – or worse – and our irrational and sometimes cruel knee-jerk reactions are a little too banal sometimes to warrant inclusion, considered lesser factors next to the dominance of the flow of narrative and spectacle. But in Cold Wind Blows, it is the very humanness – and humanity – of these sometimes irrational and in one case extremely cruel responses that really ground the film, despite its more fantastic elements.

Most overtly, these take the physical form of an extraordinarily constructed wendigo-like creature that menaces the cabin’s inhabitants, Copland and Weard putting in an impressive amount of research into the folklore and beliefs of the regions First Nations people that – while never explicitly mentioned in the film – bubbles underneath the surface with a postcolonial repression that marks beloved contemporary horror classics such as Joel Anderson’s Lake Mungo. Add to this an absolutely charming cameo by horror icon Larry Fessenden and Cold Wind Blowing has all the elements of a really solid low-budget indie horror that thoroughly deserves its second chance; hopefully, genre fest programmers and other critics will not let this one slide into oblivion.