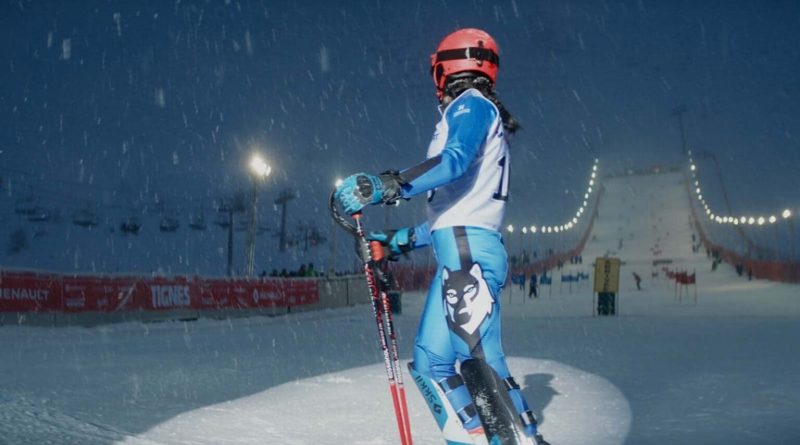 Slalom is, as the title suggests, a film about skiing. Set in the glorious French Alps, French director and co-scripter Charlene Favier’s first feature is the story of fifteen year old Lyz Lopez (Noee Abita) who is attending a boarding school for gifted high school athletes who have the ambition and potential to represent France on the ski team at the Winter Olympics.

Lyz, who is one of the program’s most talented and determined students, is singled out for special attention by Fred (Jeremie Renier), the ski coach, a former champion who was injured in competition but is now hungry for the recognition he can gain as a great teacher if one of his students makes the Olympic team. He’s a harsh coach. Initially, he’s so hard on Lyz that she contemplates quitting — but, because her divorced parents are neglectful of her, she really has no place else to go.

As her skiing skills improve, Fred believes that Lyz can win competitions and bring glory to the school and to himself. He begins to spend more time with her, pushing her to work harder and encouraging her as she’s never before been encouraged by her parents or anyone else. As the two of them spend more and more time together, she becomes emotionally dependent upon him and he — well, yes, this goes where you suspect it’s going to go.

It’s not clear whether Fred is a repeat sexual abuser — a ‘groomer,’ as we’ve come to know sex offenders who prey on youngsters — or whether he’s so taken with Lyz’s exceptional ability that his excitement turns sexual. What is clear, and is most sensitively presented, is the confusion and angst Lyz feels as she tries to figure out what to do to in this situation that feeds her ski ambitions but damages her psyche.

Slalom is beautifully crafted. The story unfolds subtly, the characters are beautifully realized, the performances are completely compelling and the cinematography is magnificent. The theme is a tough one, but one that needs exposure.

In fact, stories about sexual abuse seem to be in focus in current cinema. They’re not easy to watch, but they are alerts to clear and present dangers to vulnerable youngsters and their unsuspecting parents. It’s very interesting to see how the theme plays out in this narrative feature that arrives so soon after Groomed gave us the perspective of an autobiographical documentary. These are important films that can make a difference for kids who need to know how to define and resist abuse.