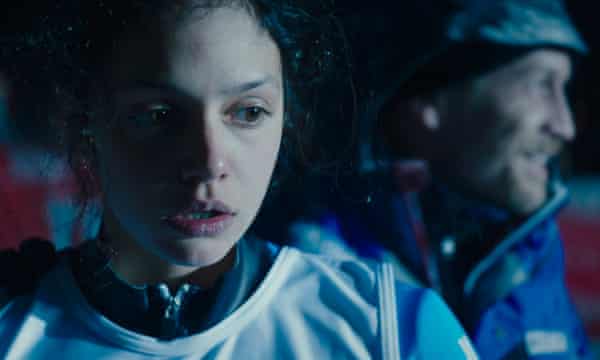 For 15-year-old Lyz (Noée Abita), the chance to take part in a high-level ski training programme in the French Alps doesn’t just represent professional opportunity, but the chance to find a place to belong. With her father absent and her mother (Muriel Combeau) having effectively abandoned her daughter for a new love in Marseille, Lyz is already adrift before she is thrust into this challenging regime, where she is judged over everything from her weight to her form.

She soon catches the attention of former champion-turned-trainer Fred (Jérémie Renier); at first it’s her natural talent that intrigues him, and she in turn responds to both his passion for the sport and the attention he gives her. Soon, however, Fred is blurring the lines of their relationship, taking the worst kind of advantage of both her youth and her obvious loneliness.

Director Charlène Favier, who co-wrote the screenplay with Marie Talon, leans into the grim realities of Lyz’s situation without flinching; it’s worth noting that, thanks to her commitment to realism, Slalom is a difficult, potentially triggering watch. It’s also deeply claustrophobic; Lyz leads a life of strict routine and sacrifice. There is no space to breathe, to make mistakes, to weather the storms and embrace the freedoms of adolescence. Various awkward encounters with her peers make it clear just how young Lyz is, and how little guidance she has. She is, effectively, a child without support, entirely isolated, and preyed upon by someone who is meant to protect and nurture her.

In a challenging role, Abita is astonishing. She harnesses both Lyz’s burgeoning sexuality — although, crucially, never in a way that suggests she is being anything other than manipulated — and her vulnerability. Her sharp-eyed focus and dogged determination on the slopes are at odds with her psychological naivety, and Abita’s nuanced, sympathetic performance makes it easy to understand how one could exacerbate the other.

Cinematographer Yann Maritaud encapsulates Lyz’s impossible situation with muted long-shots which see her unmoored in the frame, or intimate close-ups of pain and distress which she desperately tries to keep hidden. She sags under the weight of a secret which threatens to crush her. Expertly shot sequences where she skis, the wind whistling in her ears, are as much about catharsis as sporting prowess.

Beyond those moments, everything about this hard-hitting film is restrained, like a breath tightly held, and all the more powerful for it. Even in his portrayal of a truly monstrous character, Renier favours a subtle approach. Rightly, Fred isn’t given an emotional backstory as attempted explanation for his appalling behaviour. Instead, he’s presented as an entitled man who believes his power gives him license to take what he wants. And, from the way he asserts his authority over Lyz, it’s obvious he has done this before. Much like Kitty Green’s tonally similar The Assistant, this story is not about Fred, but the terrible effects of a myriad men like him.

EDITOR’S NOTE: This review was originally published in Empire Magazine.