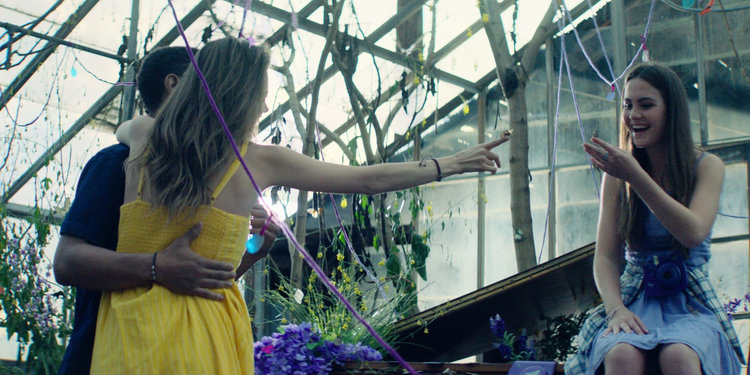 “Nice is different than good.”

But those words of wisdom apply equally well to My True Fairytale, an achingly earnest, heart-on-its-sleeve drama detailing the omnipotence of love — even, and perhaps especially, in the face of tragedy.

The movie marks the feature debut of writer-director D. Mitry, alias Dmitry Gelfand. It’s dedicated to the memory of his 17-year-old daughter Alyssa, who died in a 2017 car crash.

In newspaper interviews, Gelfand discusses how making A True Fairytale provided a way “to be close to her again.”

The movie clearly serves as an emotional catharsis for its creator.

“I wanted to write an uplifting tragedy, which is kind of an oxymoron, like My True Fairytale,” he says. “There are no true fairytales.”

As she says in the movie’s opening voiceover, “Ever since I was a little girl, I had a dream: one day, I’d become the superhero in my very own fairytale. I can fly, I can be invisible — and, at the end, I can save the world.”

Angie gets her chance to do exactly that when she vanishes following a car crash near her Florida hometown, leaving stunned family and friends trying to deal with her inexplicable disappearance.

They have a lot to process, from Angie’s grandparents (Joanna Cassidy, Bruce Davison) who have raised Angie since her mother’s death, to the estranged father (Darri Ingolfsson) she hasn’t seen in far too long.

Angie’s friends also must face more than the crash’s aftermath, especially with parents whose roadblock behavior ranges from overbearing to utterly indifferent to downright intolerant.

Yet somehow, Angie’s journey — to save the world, one beloved person at a time — proves her superpowers are real.

After more than a year of harrowing pandemic heartbreak, A True Fairytale’s arrival couldn’t be more timely.

Its heart is clearly in the right place, yet the movie sometimes undercuts its impact through a largely one-note approach.

Throughout, too many characters exchange too much in-your-face, on-the-nose dialogue, revealing too many things they already know.

All of which, alas, makes it more, not less, difficult to share their anguished feelings.