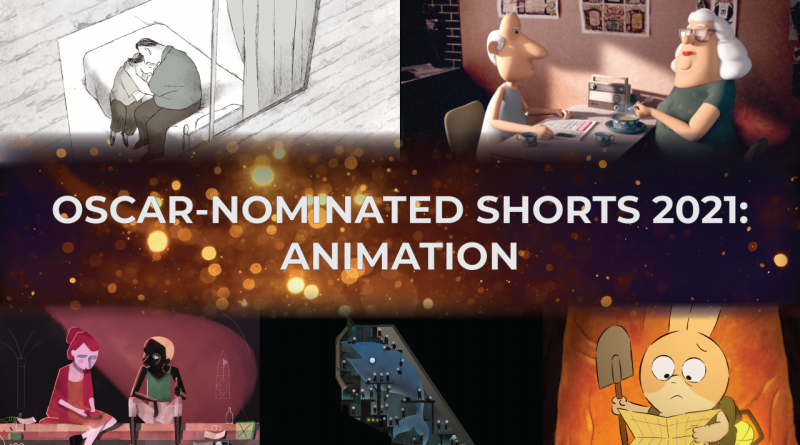 Each year, a committee of the Academy of Motion Picture Arts and Sciences chooses five animated short films for Oscar contention. Three current nominees grapple with serious topics, while two relate playful stories with genuine charm. All showcase impressive, distinctive animation. The cinema program also includes three bonus works that made the shortlist but not the final, competitive group.

First, addressing a tragedy through 2D animation, Will McCormack and Michael Govier’s If Anything Happens, I Love You watches parents cope with grief, remembering their ten-year-old daughter killed in a school shooting. Through line-drawn figures, they see events, some communicated through black silhouettes that interact. Appropriate music and Wonderful Dreamer complement the sad content, beautifully presented.

Crediting Michelangelo and Botticelli, as his inspiration, Erick Oh delivers a powerful message in Opera. Through a pyramid structure of twenty-four sections in which multiple scenarios continuously play out, war, terrorism, religion, and racism collide and repeat themselves. Four years of thirty-four animators’ work has produced a surfeit of astonishing images meriting multiple viewings. From French director Adrien Mérigeau, Genius Loci finds young Reine discerning a mystical union in the chaotic urban lives observed. Colorful, marvelously creative animation features impressive segues from one scene to the next.

Icelandic animator Gisli Darri Halldorsson’s Yes People more gently observes a group of everyday individuals who find their coping strategies tested as one day progresses. Last, in Madeline Sharafian’s lovely Burrow, a young rabbit sets out to build a home only to discover the underground world already densely populated. She pops into one home after another, encountering a diversity of animals firmly established in this Pixar treat celebrating community.

The bonus films are: Kapaemahu, four mahu, neither female nor male, who bring healing powers to Hawaii; To Gerard, a delightful tale of Gerard sorting letters, practicing magic and the young girl who stumbles in; and The Snail and the Whale following the snail hopping a ride on and touchingly saving a humpback whale. All these works of top-notch animation demonstrate the wide range of topics and styles, delivering pleasure and inviting contemplation.