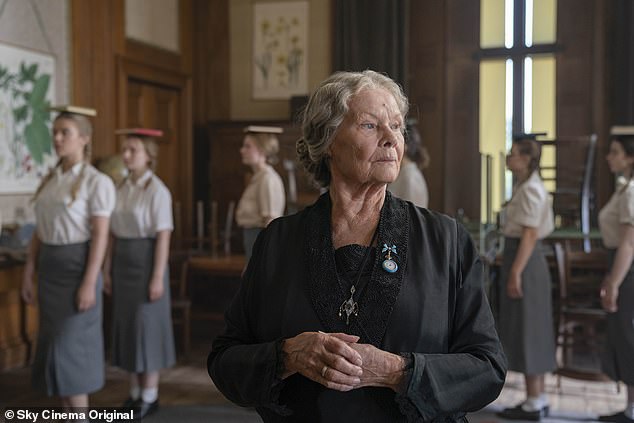 This film tells a little known story with more effort than excellence. First, the title: Six minutes to midnight translates to 11:54 on a clock; 1154 translates to the telephone exchange for the British intelligence bureau charged with finding an agent. He was posing as an English teacher but went missing with his camera.

Second, the school: Augusta Victoria College at Bethel sur Mer was the first and last school of its kind in Britain to promote Anglo-German fellowship. The student body comprises 20 daughters of Nazi mucketymucks. A headmistress and a governess lead the teenagers, who are uniformed, exercised, inculcated, and disciplined.

The headmistress hires a journeyman teacher, a Mr. Miller, for the job left by the missing teacher. “Hope you last longer than the other bloke,” says the bus driver (played by the great Jim Broadbent). Miller enters the classroom where homonyms remained chalked on the blackboard from the missing man’s last day. Miller begins to drill the girls. Among them, Astrid (Maria Dragus) is scary, Gretel (Tijan Marei) is lonely. Both are unliked.

Eddie Izzard, who principally wrote the script, plays Mr. Miller. Izzard exploits her manifold skills, including being a marathon runner and speaking multi-languages. Her earnest acting is presentable if not stellar. Also less-than is Dame Judi Dench’s performance as the headmistress, loyal to her “girls.” Duplicitous Ilse is carried by Carla Juri.

Director Andy Goddard, who has directed episodes of Dr. Who and Downton Abbey, points his cameras around corners and door jambs to spy on spies. By contrast, his cameras also record overviews of the calling sea. Goddard well captures the tension of the time.

Six Minutes to Midnight is based on true events, but small inaccuracies, such as aircraft colors, pock the plot and execution. Still, the film introduces the Anglo-German Fellowship as part of the wide story of World War II, so it adds to the filmed history of that great war.