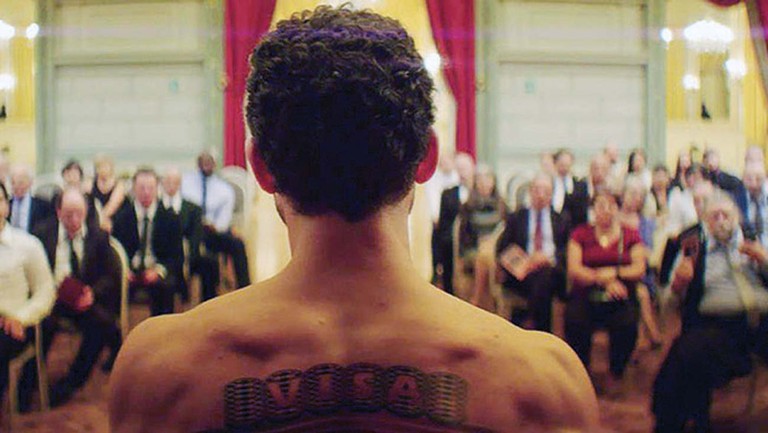 Some tattoos have such design and craftsmanship, they’re works of art. But what happens when a tattoo transforms someone into living artwork, effectively dehumanizing them? The Man Who Sold His Skin, an Oscar-nominee for Best International Feature Film, puts this dilemma on display through Sam, a Syrian refugee who consents to a full-back tattoo of a visa, then finds that this literal stamp of freedom confines him in other ways.

Sam (Yahya Mahayni, Fearless Girl) already feels like an outsider, living in poverty and exile, when artist Jeffrey Godefroi (Koen De Bouw, TV’s The Last Tycoon, Red Light) chats him up at a gallery opening in Beirut. Sam has been sneaking free food from the buffets at these events, but instead of chasing him away, Jeffrey sees an opportunity to comment on refugees by extending a Faustian bargain.

He pays Sam to use his back as a canvas for a Schengen visa, which covers travel among 26 countries without border controls. The artwork effectively makes Sam part of Jeffrey’s exhibit, enabling him to travel to Brussels. “I just made Sam a commodity,” Jeffrey explains, noting that commodities can circulate more freely than people.

Writer-director Kaouther Ben Hania (Beauty and the Dogs) doesn’t hammer on the parallels between Sam’s situation, human trafficking, or sex work, for that matter, but there are plenty for viewers to draw. Sam enters into this unusual arrangement both for the money for his family back home and in the hope of reconnecting with Abeer (Dea Liane, Retour à la nuit), the sweetheart he left behind after an arrest forced him to flee.

Ben Hania sets up their love story in a sweet moment of joy while the two ride a train early in the film. When Abeer says she loves him, Sam is so overjoyed, he tells the whole car, “It’s a revolution, we want freedom,” explaining that he means the freedom to marry her. The passengers break into applause and song while the couple dance.

Unfortunately, another passenger recording Sam’s outburst turns him in to the authorities, who arrest him during the night. A sympathetic acquaintance conveniently enables his escape, but his plans of a life with Abeer seem shattered.

As part of Jeffrey’s exhibit, Sam lands in Brussels, where he must sit in a museum with his back under spotlights to tour groups and visitors. A refugee organization reaches out to him, saying he’s being exploited, to which Sam replies that what he does with his body is none of their business. Meanwhile, Sam’s mother is distraught that he’s photographed this way on the internet.

Mahayni subtly shifts from being confident and defensive to showing how being objectified erodes his self-esteem. It hurts and surprises him as much as he’s grateful for the financial benefits. De Bouw and Monica Bellucci (TV’s Mozart in the Jungle, Spider in the Web) as Jeffrey’s assistant, Soraya, also turn in layered performances that demonstrate their ambivalence about Sam, his well-being, and his value.

Meanwhile, Sam and Abeer see each other again. She’s since married Zaid (Saad Lostan), a diplomat of whom her mother approves, because she felt “obligated” once Sam vanished. A wounded and angry Sam can’t understand this, but Liane’s expressions speak volumes, and Ben Hania never crowds empathy for Abeer and her limited choices out of the frame.

As an artist, Jeffrey is said to elevate worthless objects just by signing them. Sam obviously has value as a human being, but before his arrest and after he becomes art, he yearns for others to see that. Set apart in the museum and other events, he turns to interact with people staring at and commenting on him. They gape and recoil as if they’re astonished he’s alive.

Sam eventually regains his dignity, but not before Ben Hania and The Man Who Sold His Skin question how often we objectify others and hold them at arm’s length, even when they’re not on exhibit. It’s a thought-provoking and unexpectedly nuanced film.