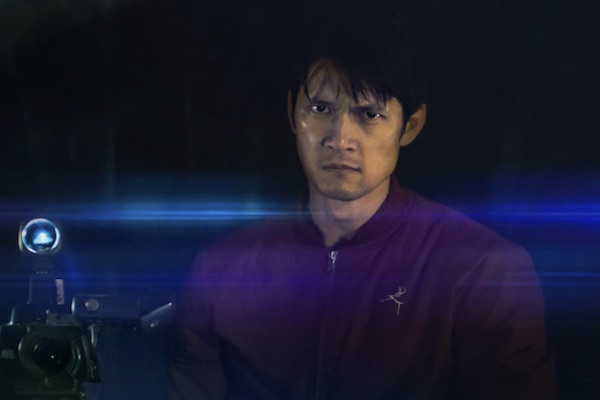 There’s a certain generation for whom Max Headroom needs no introduction; a strange 80s computer generated pop cultural phenomenon who existed in a liminal space in the mediasphere, his square head, twisted humour and all-round weirdness crossed television (where his fame skyrocketed via his own television show), feature film, Coca-Cola commercials, and even pop music, providing the vocals of one of Art of Noise’s objectively best songs, 1986 single Paranoimia. The abstract embodiment of 80s cyberpunk fantasies of AI, there was a dark strangeness to Max Headroom that for those of us who lived through the peak of his popularity was almost hypnotizing.

Yet while perhaps a footnote to the broader Headroom success story, the still-chilling signal hijacking in Chicago in 1987 where a Headroom look-alike took over two Chicago television stations remains one of the most notorious instances of video piracy of all time. These videos can be found on YouTube and still have a genuinely eerie quality to them, heightened only further by the fact that those responsible for the act were never identified.

In this context, it feels only natural that this would serve as the inspiration for a horror movie, and if there’s anything surprising about Jacob Gentry’s Broadcast Signal Intrusion, it’s simply that it took so long for someone to clock just how powerful a foundation for a film in this genre this strange real-life story is. But Broadcast Signal Instrusion is much, much more than mere fanfic, and while set in the 1990s, the film’s fascination with media-centred conspiracy theories make it very much potent, relevant viewing from a contemporary perspective.

The film follows troubled protagonist James (Harry Shum Jr.), a photography nerd who works on digitizing old VHS tapes in a television archive. On an otherwise seemingly ordinary night at work, he discovers the first of a series of creepy broadcast signal intrusions; clearly inspired by the Headroom mysteries, here we have a figure in a disturbing white face mask which while clearly gendered female feels thoroughly dehumanized and uncanny.

Haunted by the disappearance of his dancer wife, James spirals into the conspiracy-laden world surrounding the tapes, meeting people along the way who may or may not be allies, and who may or may not be telling him the truth. Convinced that the videos have a connection to the disappearance of his wife and a number of other women, the lines between reality and paranoid delusion increasingly collapse around James, making his investigation even more difficult and abstract.

For some critics, parallels with Francis Ford Coppola’s magnum opus The Conversation are unavoidable, as essential to Broadcast Signal Intrusion in many ways as the Max Headroom incidents themselves. But on this front, it is somewhat surprising then that so many critics seem to demand that Broadcast Signal Intrusion adhere to their idea of a pedestrian, cookie cutter media thriller template, when it is simply not that kind of film and has no intention to be.

Rather, like Coppola’s film, Broadcast Signal Intrusion functions best when understood as a portrait of masculinity in crisis, compounded by a faith in media technology that cannot and will not reveal its secrets, simply because it does not have to. This movie is no clear-cut, legible missing person mystery, as its ambitions are far, far greater than that: it is a film about grief, about obsession, and about our susceptibility to conspiracy theories to fill the void at a time when emptiness reigns supreme. And on this front, Broadcast Signal Intrusion – with all its ambiguities, ellipses and poetic elisions – is both unique and rewarding, if only for a more discerning audience who doesn’t want or need their themes spoon fed to them.