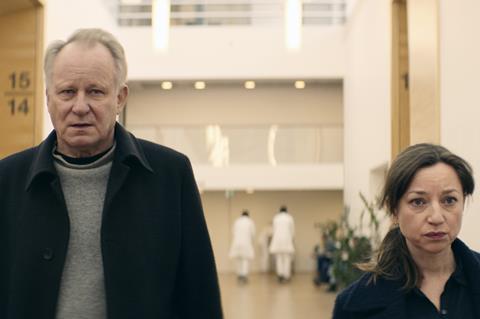 Sodahl couldn’t have chosen a better leading lady than Andrea Braein Hovig as choreographer Anja, who learns her lung cancer that led to an operation a year earlier has metastasized and spread to her brain. She reminds of a young Helen Mirren, with a face that is more handsome than pretty. The fact that Anja learns about the news at Christmas time makes matters all the more dire and depressing. But as she tells her partner Tomas, played by a terrific and stoic Stellan Skarsgard, that she needs him to be there for her. Anja knows she will have to rely on her distant companion in her time of need.

But at a certain point as Anja’s surgery looms, the pair decides to finally tie the knot after 20 years together on New Year’s Eve. While their characters are more prickly and distant than endearing, the fact that their children, adult friends and Anja’s kind and caring father are there for them makes us think more highly of Anja and Tomas considering how the attendees are fully invested in making their wedding both memorable and romantic with fireworks in the falling snow and strewn rose petals and candlelight in their bedroom.

I can imagine a Hollywood soap-operatic interpretation of this story whose final moments would be a semi-uplifting. But Sodhal bravely maintains her stoic approach to her scripts emotional mood swings. Anja’s kind and sympathetic father gets the truest line in the movie as he tells his daughter, “You choose the life you get to a great degree.”