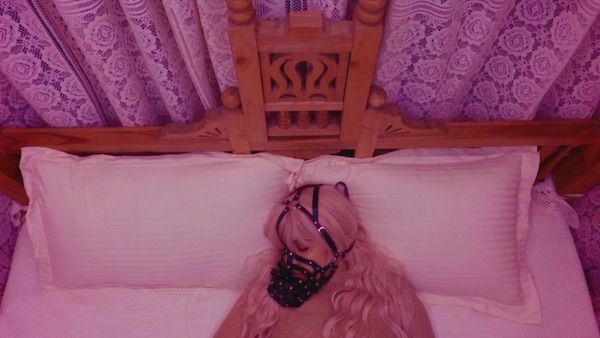 Sometimes a film comes along that almost feels completely immune to the orthodox language of film criticism. These are films that have a spirit of resistance seemingly embedded into every frame, not just to societal norms and expectations, but almost also in regard to the language of how they as an artwork can be discursively framed. It is, to be frank, a challenging experience as a film critic to be placed in this position, but as a viewer, at its best, it is straight-up, unambiguously electrifying.

Indian polymath Sapna Bhavnani’s My Dog is Sick is precisely one of these films; watching it felt akin to being picked up and thrown against a wall, with ideas, references and observations scrambled before one even has a chance to get words down on paper. And what a refreshing, even radicalizing experience it is. My Dog is Sick might superficially be described as a feminist experimental horror film, and one of the first things I realized when trying to collect my thoughts on this movie was that as a white woman film critic living on stolen, unceded Aboriginal land in Australia, my frames of reference for Bhavnani’s film were almost intuitively westernized; a furious, punk feminist Maya Deren was my first thought, but oh how reductively this dismisses the uniqueness of My Dog is Sick, acting only to reveal my own narrow frame of reference and my own inescapable western bias.

Dialogue free and drenched with a vibrant rainbow color palette, My Dog is Sick takes place primarily inside a small apartment except for one memorable scene where the ‘dog’ takes a brief but necessary trip outside. The film begins with our pink-haired protagonist (Rajshri Deshpande) and her young lover (Anshuman Jha) canoodling lazily around this living space in that slow, warm way that young lovers do. Taking a turn towards what at first feels like an almost pedestrian twist towards S+M when he places a dog collar on her, we quickly realize – especially when framed in reference to the title – that there is much more at stake here as this is soon followed by him adding a leather dog muzzle to her face, throwing a newspaper across the apartment for her to fetch.

Drenched in an omnipresent sexuality, Bhavnani herself appears in an identical pink wig to her film’s protagonist, and it is here that the kaleidoscopic possibilities of interpretation explode on the screen before us. There’s simply so many ways to interpret this film, and those interpretations rest as much on our own sensorial experience of this visually rich artwork as they do how we more intellectually process the action on screen. What remains unavoidable, however, is that Bhavnani is fierce and fearless when it comes to demanding we open our minds to new ways of thinking about intimacy, power and gender, presented in a manner that is at times poetically beautiful, while at others, shocking in its violence.

That Bhavnani is a new name to me until I discovered this film feels like a gross oversight on my part, even an embarrassing one. Her legendary Mad O Wot hair salon in Bombay opened up a whole world of ways for the hair stylist turned filmmaker, author, performer, fashion designer, playwright and entrepreneur to express herself and share her wholly unique and very powerful vision of the world. In 2019, her documentary Sindhustan (now on Movie Saints) went global in its success, winning numerous awards and dazzling audiences at film festivals around the world. An unapologetic feminist, her recently launched production company Wench Films promises to only further not just her own work, but to showcase, champion and promote that of other women working in film in India.

If more filmmakers had even a skerrick of the courage and creativity of Bhavnani, the cultural landscape – not just in India, but beyond – would be all the richer for it. My Dog is Sick will not be for everyone and is to be celebrated for it. This is its strength. These are the voices that need amplification; the ones that shock us, the ones that move us, the ones that confuse us, and the ones that dazzle us.