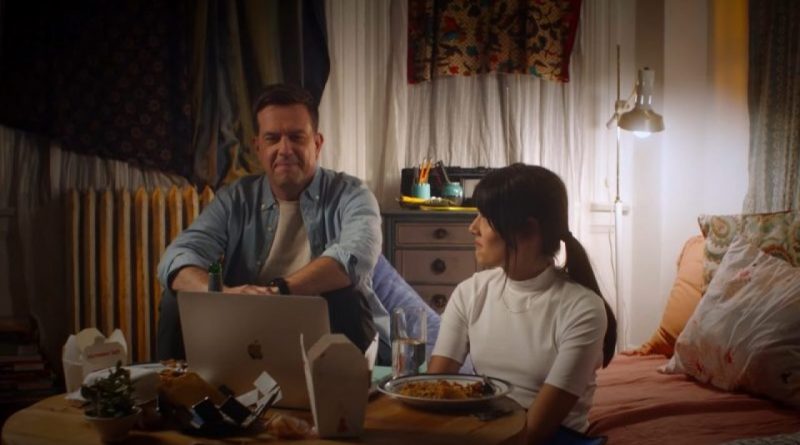 Think of Nikole Beckwith’s rather off-beat and charming maternity comedy Together Together as Knocked Up for the enlightened era of wokeness. Instead of two strangers whose drunken one-night stand ends in a pregnancy, we are presented with what is known as a gestational surrogate who agrees to carry a single 40-something man’s baby so that she can finally afford to attend college.

That the performer portraying the surrogate is a trans-woman doesn’t matter in the least. If anything, it makes this tale of platonic partnership and mutual admiration work, it is Patti Harrison’s enlightened poker-face take on Anna, a single millennial woman who works as a barista is finally taking steps to pursue her delayed dreams.

As for the father-to-be, Ed Helms as tech worker Matt initially see-saws between interrogating Anna as if he hopes to catch her in a lie about her flaws and later insist on keeping tabs on her sex life as well neurotically keeping tabs on what food and beverages she is drinking. He also insists they binge-watch Friends – or as he calls it, “The Godfather of sitcoms.”

Eventually the platonic pair realizes that they both need to rely on and connect together on a more intimate plane as they attend new-age birth classes before they bring a new human into the world. That they manage to agree on what color walls the nursery – dusty blue green – is one of the first steps toward after each other’s back. They also agree on a gender-neutral name for the baby and, at least for the time being, decide on Lamp.

But matters warm up considerably as we head into the second and third trimester as the pair choose a crib and form a habit of eating candy while walking together. Upping the ante of the amusing wry factor of the script is Tig Notaro as a therapist while Julio Torres as Anna’s opinionated co-worker adds a welcome sprinkle of snark.

Together Together doesn’t fully redefine the unexpected pregnancy comedy for the 21st century, but it does take enough baby steps to upend the lazy traditions of the genre.

EDITOR’S NOTE:Together Together is AWFJ’s Movie of the Week for April 23, 2021.