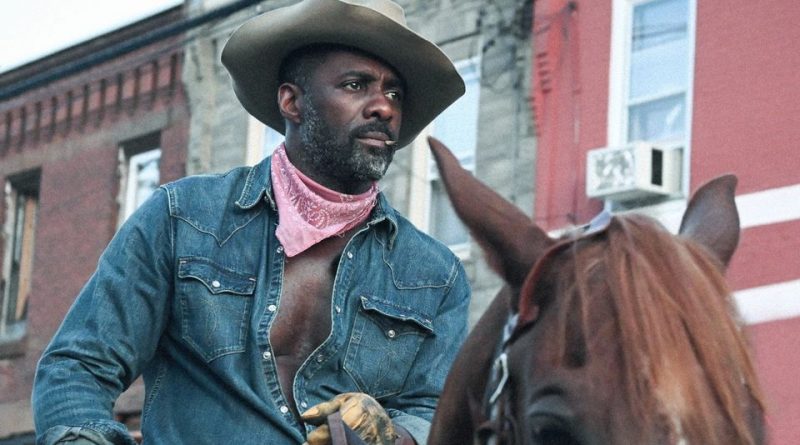 This Eastern Western on Netflix reveals a segment of Black history that most of us were not aware of.

Several years ago, commercial writer/director Ricky Staub looked outside his office window in North Philadelphia and was stunned to see a horse and buggy going down the street – like a remnant of another century.

On further investigation, he realized his office was only a mile away from the Fletcher Street stables, a non-profit organization that’s been dedicated to inner-city horsemanship for 100 years. That prompted him to write this fictionalized, coming-of-age family drama, revolving around this riding culture.

When rebellious 15 year-old Cole (Caleb McLaughlin) is expelled from yet another Detroit school, his distraught, single mother (Liz Priestly) drives him to Philadelphia to live with his estranged father, Harp (Idris Elba), an ex-con who has found his purpose working with horses.

Barely suppressing his intense feelings of abandonment, defiant Cole hardly knows his father, a gruff disciplinarian who puts him to work mucking out stalls in the stable and criticizes Cole’s spending time with Smoosh (Jharrel Jerome), a childhood friend who is heavily into dealing drugs.

To avoiding the expense of building sets, Staub filmed on real locations, like the stoops of nearby townhouses, using natural lighting. Idris Elba (Thor) and Caleb McLaughlin (Stranger Things) did their own riding, which was a challenge since Elba is allergic to horses and McLaughlin hadn’t ridden since he was a child.

Environmental drama also plays a role, since the Fletcher Street stables in the Strawberry Mansion neighborhood has become a victim of gentrification.

On the Granger Gauge of 1 to 10, Concrete Cowboy is a subculture-solid 7. Saddle up!