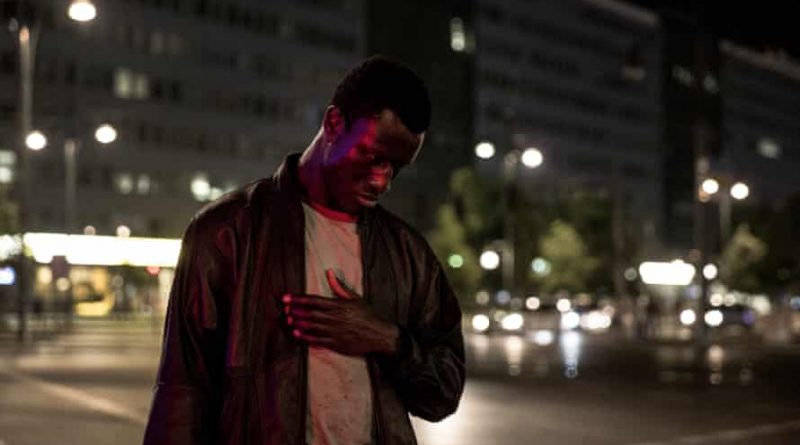 Alfred Döblin’s 1929 novel Berlin Alexanderplatz explores the criminal world of Weimar Germany through Franz Biberkopf upon his release from prison for murder. First filmed in 1931, in 1980 the prolific German director Rainer Werner Fassbinder offered a fifteen-hour television adaptation. Now Burhan Qurbani has shifted the time frame forward to the twenty-first century and excised the Nazi references.

Most significantly, German director Qurbani anchors his version in undocumented Guinea-Bissau immigrant Francis, adds surrealist interludes with psychedelic colors, and loses the complexity of the novel. Moreover, his simplistic, formulaic focus on drug dealers marginalizes women, granting them agency primarily as sex workers or inconsequential sex partners. An update to reflect a current oppressive environment, especially for undocumented immigrants, is a relevant, worthwhile endeavor. However, it requires an avoidance of clichéd scenarios. Why adapt Berlin Alexanderplatz only to surrender its solid, multiple insights and density?

Divided into five parts, what most recommends the film is the captivating performance by Welket Bungué as Francis, also called Franz. His charismatic presence gives scenes of little interest a compelling quality. Similarly, Albrecht Schuch’s Reinhold, the sociopathic manipulator of Francis, conveys a palpably repulsive, lowlife villain. Francis’ love interest, Mieze, well played by Jella Haase, narrates the film with periodic voiceover throughout the almost three-hour running time, appropriately commenting that “We’ve walked down a dark avenue.” She, however, plies her trade as a high-priced call girl in an underdeveloped character. These and all the supporting actors display the talent to handle much more nuanced, intricate interactions. Those included here are telegraphed and unsatisfying in their unadventurous predictability.

Technically, effective compositions, symbolic mirror images, and seamless editing add appeal, though several uses of the n*** word are jarring. American director John Huston once said you should never remake a great film, it only sets you up for disappointing reception. That hold true here. In German with English subtitles, Berlin Alexanderplatz is available from Kino Lorber.