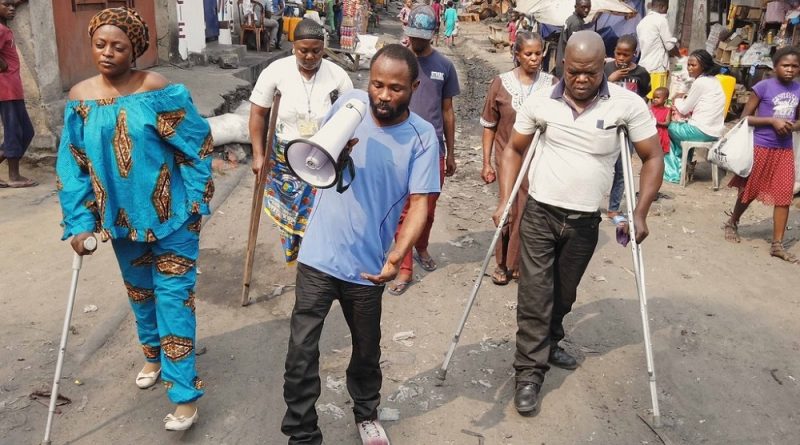 In Downstream to Kinshasa, Congolese writer/director Dieudo Hamadi fearlessly and directly documents the legacy of the 2020 Six Day Ugandan – Rwandan war. During it, one thousand residents of Hamadi’s hometown Kisangani were killed, three thousand wounded. Nine of those victims now band together, determined to travel to the Congolese capitol Kinshasa to demand the compensation ordered by the International Court of Justice.

Since these men and women now wear leg prosthetics or have amputated arms, this trip will pose distinct challenges. Moreover, the boat on which they join other travelers lacks adequate facilities to protect them from the storms they encounter. Rain, inadequate and bad food, unsatisfactory tarp shelters prevail. Nevertheless, they will persist through daunting hardships, intent on delivering their letter of petition to the National Assembly. They will be denied even this consideration, facing a hostile reception at the Parliament building and later by U.N. representatives.

Punctuating this primarily cinema verité style are excerpts from this group’s theatre presentations during which they directly address their physical and political conditions and the corrupt governmental indifference. Amazingly, these individuals achieve a great deal: their persistence, their dignity, and their commitment never wavering. As Inspirational as they are, this documentary is often painful to watch. After marching in street protests, leg stumps need to be massaged because of the ill-fitting plastic legs rubbing flesh. In another instance, one of the men on crutches can’t keep his balance as he tries to navigate an uneven gravel street. As distressing as some scenes are, the extraordinary spirits and solid camaraderie prove inspirational. In addition, as an election takes place, their prospects end on an upbeat, celebratory note

The importance of knowing this tragic history merits the careful attention Hamadi gives it. We learn that the conflict began over mineral rights resulting in more than six million Congelese killed between 1996 and 2020, the worst death toll since WWII. Perhaps learning more about such tragedies, we can do more to prevent them in the first place. The first Congolese film selected for the Cannes Film Festival, in Lingala and Swahili with English subtitles, Downstream to Kinshasa is available at Icarus Films.com.