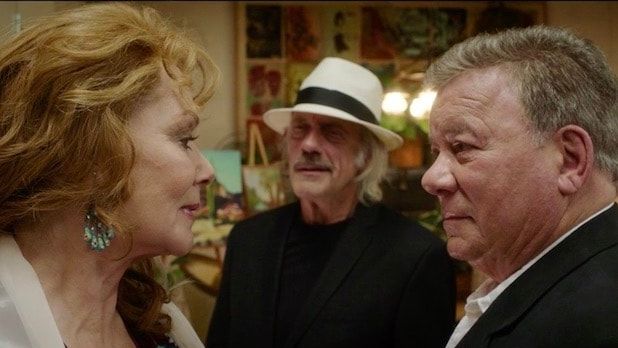 Hard to believe but William Shatner turned 90 on March 22nd – and in this mildly amusing rom-com, he’s still as flirty and frisky as ever.

At night, he’s honorary “host” at Captain Hook’s, a local piano bar, where he jokes with the guys and makes lecherous passes at scantily-clad women young enough to be his granddaughter, even great-granddaughter.

Complications arise when a local “cholo,” Pablo (Carlos Miranda), in a lowrider challenges him to drag race. Eager to engage, Victor doesn’t notice the police car lurking around the corner, so soon he’s in court, where the judge impounds his car and takes away his driver’s license until he can pass the DMV test in a month.

After years of proclaiming, “Only losers ride the bus,” Victor’s stuck with taxis, Ubers or even walking. Eventually he stumbles onto a bus where he meets bohemian Caroline (Jean Smart), owner of the Cuckoo Café.

Although superficially they’re not compatible – she’s a strictly organic hippie while he’s heavily into junk food, like packaged Honey Buns – until she seduces him with her homemade strudel.

As the amiable plot meanders forward, Caroline’s also avid about raising money to benefit Saving the Desert Tortoise, aided and abetted by her young, handsome artist friend (Esai Morales), whom Victor considers a rival for her affections.

FYI: previously, Shatner and Lloyd appeared together in “Star Trek III: The Search for Spock” (1984).

On the Granger Movie Gauge of 1 to 10, “Senior Moment” is a goofy, nostalgic 6 – for geriatric “Star Trek” fans. Streaming for rent/purchase on Fandango, Vudu, Prime Video and Apple TV.