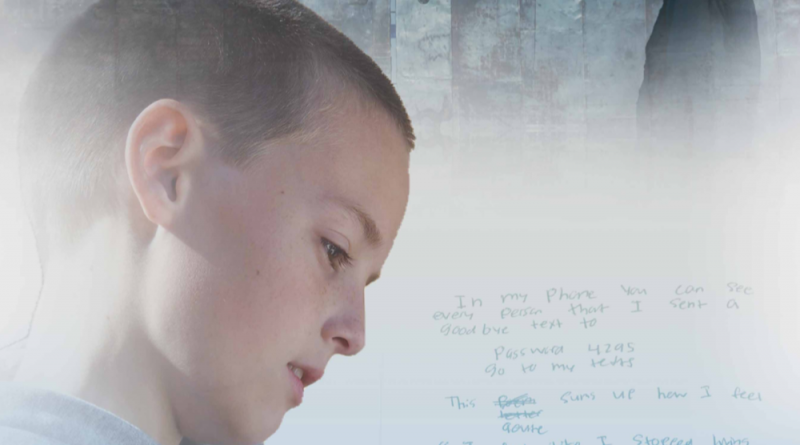 Cinema Libre Studio’s gutting documentary, Tell My Story, details the clues and the searching for answers regarding the life of a teenage boy, and the whys of his shocking death. Ryan Reid ultimately lost his battle with depression, as relived and retold by his father, Jason Reid.

Grief is like disease, it’s a tangible force that affects your health, your mind, and everything in your life. Some family deaths are harder than others. That is a fact. When it comes for your child unexpectedly by way of suicide, it becomes a living death for the surviving parents and family.

The intensity may fade as time passes and one unravels events leading to the person’s decision to end their life. The gamut of feelings, guilt, anger, and despair, never fully leave the loved ones left behind.

On paper, Reid and his family are living the good life. Money is not an issue. But Reid’s world collapsed during March, 2018, when his 14-year-old son Ryan committed suicide in the attic of their home while Reid and his wife were away on vacation. It is important to note that his wife is grieving deeply still and was not willing to be part of this film.

The film brings home the tortures of trying to understand why a happy-go-lucky kid who, as it seemed, had everything felt overwhelmed by living. Self-harm was a hidden thought, and what you think the beaming smiles in his family videos and pictures showed was actually obfuscating a world of hurt for Ryan unbeknownst to those closest to him.

What people write off as normal moody teenager years can often be the signals of clinical depression. There is no question modern technology has driven the numbers of suicides to insane levels as teens are most vulnerable to what others think of them. It’s their whole world. Teen suicide is on the rise. All suicide is on the upswing. Opioid overdosing deaths by middle-aged people are called deaths of despair these days. Social media feeds delivered by ubiquitous smartphones are clearly gasoline on this fire. Think twice about getting a kid unfettered internet access. Get them a flip phone. Be vigilant.

Reid is aided in his film journaling by other people willing to lay bare their stories, suffering in similar situations. They, too, wonder what they could have done differently. Reid takes us on a sobering testimony and backward-looking analysis of key moments, as he processes this overwhelming loss. His late son Ryan had a generosity of spirit, despite his mental state at the end, as he left a trail of clues to tell his story in a bid to help others.

Tell My Story is the cautionary tale that no one thinks they need, but everyone—especially parents— should be required to view. Someone has to say it, social media is complete bullshit and smartphones are too much information and garbage for a young person’s brain to keep in healthy perspective. All kids now living in this age of instant shaming, bullying, judgment and exclusion—thanks to accelerated social media platforms and distortion enhancement photo software—need to know that people are paying attention, want to know how they truly are and be reassured that they matter and that they don’t have to have all the answers to life right now. The wildcard in all of this is an undiagnosed mental disease, depression, schizophrenia, and other disorders that chemically bathe the afflicted person’s brain exacerbating feelings, reactions, and emotions.

Most of the film is the Ryan’s father’s pov, he describes himself as a “fixer,” well compensated for his corporate finesse in reverting flailing companies and lackluster or lost CEOs. He chews on this a lot. How can he be so good at his job and lose sight of where Ryan was falling through the cracks? It clearly eats him up. The film feels like a cathartic quest to provide information to other families that is overdue in this age of alarming rates of solipsistic grief and depressive thoughts as human resiliency and coping skills are clearly on the wane.

Personally, my own sons went through their times of anxiety and self-doubt. It runs in my family. My great-grandfather hanged himself in a barn unable to adjust to life in America, feeling a failure and lost in a culture he didn’t comprehend.

This film asks that you pay closer attention to those around you. That is, in essence, what Reid asks of you, the viewer, as he lays bare his most raw feelings of sadness processing Ryan’s decision, his actions, and the reverb of his final words. There is a strong undercurrent of anger at the modern world’s tech affectations that made Ryan’s situation even more urgent to monitor.

Caveat: If you are emotionally in a fragile state, this film might be too much. But it is important and everyone should bear witness to what the hell is happening all around us to our young people.