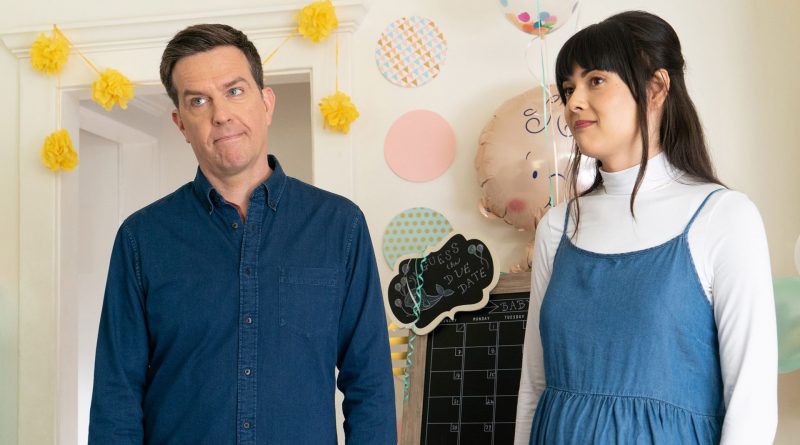 Ed Helms hauls his silly reputation from The Daily Show and Hangover to where’er he appears to act. When you see his name leading the cast, you expect a film of fluff. Major fluff. Plus naughty bits. But Together Together offers more, surprisingly and subtly, under Nikole Beckwith’s writing and directing.

Helms plays Matt, a technician in his forties who wants a family. Matt hires Anna to be his gestational surrogate. Played so very well by Patti Harrison, Anna is in her 20s and nobody’s fool. She can use the money. She’s had one child, a teen-ager’s oopsie, so she’s not new to this pregnancy routine, but she is new to Matt.

The two meet cute, if by “cute” you mean two people interviewing each other for the roles of seed-planter and seed-bearer. It’s funny. Much is funny throughout the film, with Anna setting boundaries and Matt trying to abide as he trips over the giant teddy bear. For her? for the baby? for his own dreams? The two grow closer even as they pull apart, and their dialogues, under Beckwirth’s good pen, grow more believable.

Harrison and Helms do their best. She brings both innocence and vulnerability to the role of the surrogate mother. Helms has never been more serious: he brings knowing sadness to bachelorhood and pays particular attention to his facial reactions.

The two leads are ably supported by Tig Notaro as a calming counselor, Sufe Bradshaw as a wry technician, and Julio Torres as Anna’s flaming co-worker. The funny ranges between subtle and outrageous; the poignant, between heart-breaking and real, right to the end. Try to get that last scene out of your mind, and that will tell you what this film is more than fluff. Together Together works in a quiet way to be meaningful as well as amusing.