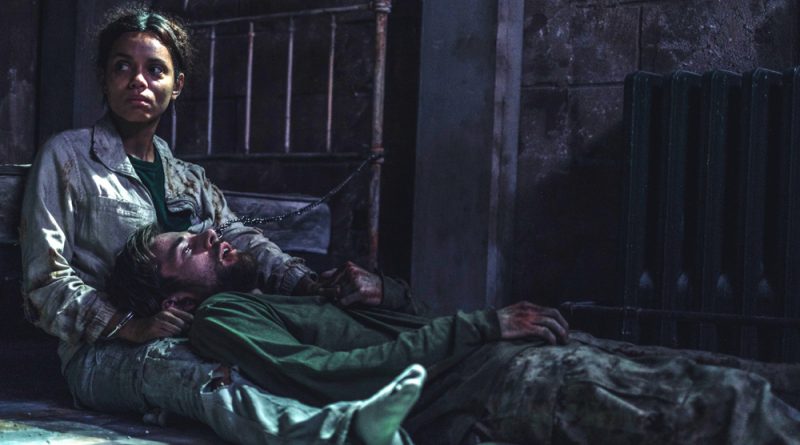 A Middle Eastern terrorist cell handcuffs American woman Khadija Young (Georgina Campbell, TV’s Krypton) in a grimy room, demanding to know why she’s in the Iraqi city of Mosul. She insists she’s a journalist. Then they yank out one of her fingernails with pliers, and her story starts to change.

Shot largely in one room, the indie action drama Wildcat toys with its characters – and viewers, too, to some degree. By staying with Khadija’s viewpoint, writer/director Jonathan W. Stokes forces the audience to catch up on who her captors are and why they might want her. He also raises the question of how honest Khadija is under pressure, or if she’s telling her captors and a wounded US Marine also being tortured what they want to hear.

Stokes, who shot a contained story previously with 2010’s Air, maintains decent suspense throughout Wildcat through a variety of shots and the characters’ interplay. The captors’ ringleader, Abu Khalid (Mido Hamada of 2019’s Veronica Mars), is a bomber convinced that Khadija must be working for the State Department or CIA. Flinty and calculating, he tells her about his dead daughter, kisses her forehead, electrocutes her in anger, and also threatens her with sexual assault.

The Marine, Luke (Luke Benward, Dumplin’), unfortunately spends a lot of time unconscious or writhing in agony, although he’s tortured offscreen. At first, he calls Khadija a lightweight for telling Khalid her name and other biographical details. He’s also ticked that he’s lost his whole unit and might die for protecting a journalist – until Khadija indicates she’s more than she appears.

The film tips its hand a little early in that regard, but Campbell, who won a BAFTA TV Award for Best Actress for 2014’s Murdered by My Boyfriend, turns in a gripping performance. She’s fearful, compassionate, and cunning, telling Luke that they have to lie to Khalid long enough to prove useful and stay alive. Viewers might want to know more about Khadija’s background and motivations beyond what she shares under the circumstances, but a flashback or scenes before her captivity also might disrupt the enclosed environment that Stokes creates. The isolated setup also makes Khadija’s despair and resourcefulness all the more believable. Although Khadija at one point says that she’s never been a rule breaker, Wildcat suggests that assumptions only push her harder.