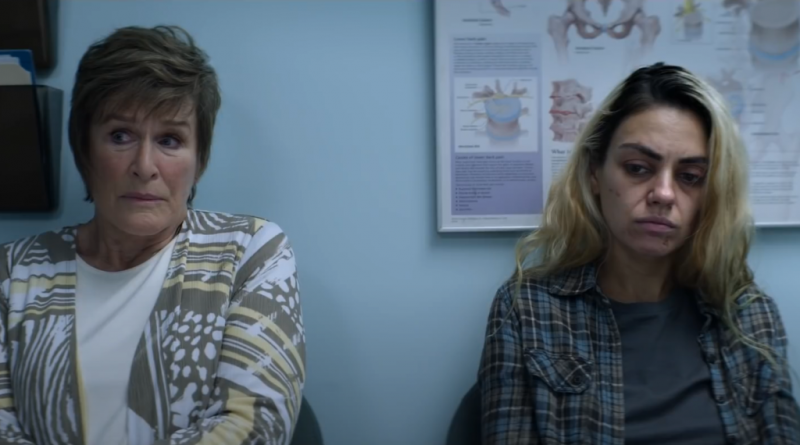 Very little about Four Good Days is easy to watch — not drug addiction, mother/daughter tension and distrust, or justifiable anger against Big Pharma. The title refers to the wait before the user can get a shot that will help her break her addiction, but those four days are horrific for her, her mother, and her mother’s husband. And the audience.

Molly appears, scabbed and rail thin, at her mother’s door. “I’m done. I wanna come home,” she pleads to a nearly closed door. “I’ve heard this speech for 10 years,” says her mother Deb. “Come back when you’re clean.”

Deb has obviously been counseled regarding her drug-addicted daughter. Despite her better judgment, however, she lets her daughter in, takes her to a rehab facility and checks her in. But not before reminding the seemingly judgmental registrar that the medical community is responsible for having addicted Molly back when she was 15. The teen had hurt her knee and was prescribed oxycontin. “No prescription for opiates was denied her,” rants Deb.

The clinic’s doctor says Molly has to stay clean for four days after her stay in rehab, which means she has to board with her untrusting mother. Deb eats bridge mix and frets. When she lashes out at her husband, he has the spine to remind her that he is not her punching bag when she’s itching for a fight.

Glenn Close plays Deb, Mila Kunis is Molly, and Stephen Root is the step-father. Each is adequate.

Deb and Molly’s story was inspired by Amanda Winter and Libby Alexander’s story, and, probably, many a parent and child caught up in the opioid epidemic can identify with these pro- and antagonists. However Four Good Days makes the situation of recovery worse by showing painful and ineffective treatments rather than offering multiple medications out of compassion and modern medical practice. For that reason alone, the film should be viewed with a massive grain of salt. With that caution, Four Good Days is even tougher to watch.