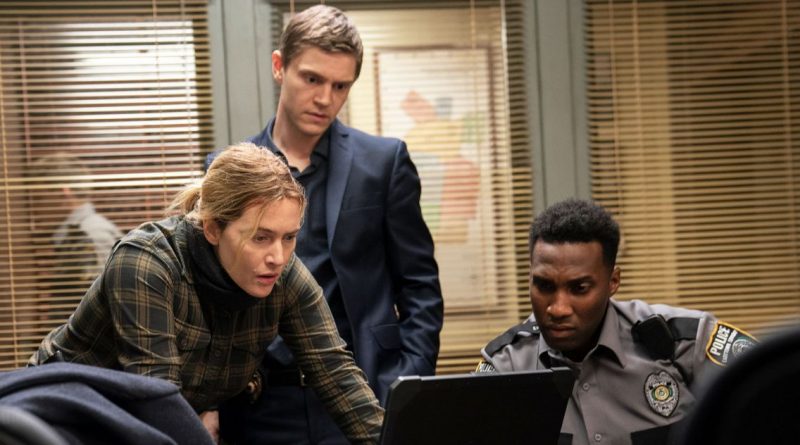 Life isn’t easy for Mare Sheehan (Winslet), who is desperately trying to solve a perplexing murder case revolving a teenage girl found sprawled in a creek deep in the woods. Townspeople are wondering whether this grim discovery has anything to do with another young girl-gone-missing a year ago.

Creator/writer/producer Brad Ingelsby, a native of Berwyn, Pennsylvania, set out to tell a story about his hometown: “Easttown is a mixture of a number of different Pennsylvania towns. I wanted the show to be about a certain place in the world, a certain group of people. These people have been born here, raised here and now they’re raising their children here.”

Which means everyone knows everyone and far too much about their personal business.

To Mare’s dismay, her ex-husband, Frank Sheehan (David Denman), and his fiancée occupy the house directly to the rear of hers with adjoining backyards: “Of all the houses he could move into, he had to buy the one right behind mine!”

Then there’s Erin McMenamin (Cailee Spaeny), whose corpse is found in the creek. And who is the mysterious neighborhood prowler, peeping in windows?

Mare resents the arrival of County Detective Colin Zabel (Evan Peters), who’s been called into assist. But she seems to find solace with Richard Ryan (Guy Pearce), a creative-writing professor, and her best-friend, Lori Ross (Julianne Nicholson), whose marriage isn’t what it seems.

On the Granger Gauge of 1 to 10, “Mare of Easttown” is an intriguing 8. Planned as a limited, one-season HBO series, who knows if there will be a second season?