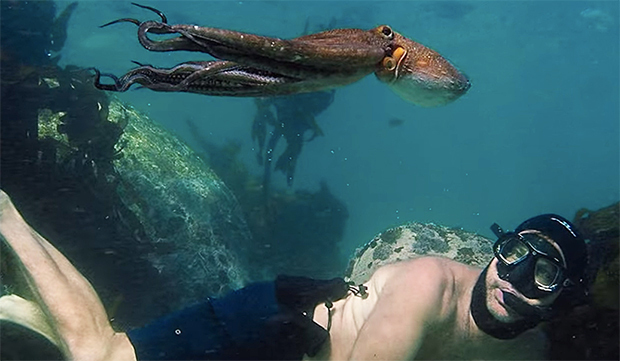 I’ve seen hundreds of nature documentaries but nothing like Craig Foster’s compelling, Oscar-winning underwater adventure, chronicling his free-diving – without wetsuit or scuba gear- in the frigid Atlantic Ocean in the Cape of Storms, off the Western coast of South Africa every day for a year.

Best known for filming The Great Dance (2000) about the indigenous Kalahari San trackers, Foster was, admittedly, mentally depressed and physically exhausted when he started swimming in a shallow cove with a dense kelp forest.

One day, he spotted an octopus hiding in a crevice and, somehow, developed a kind of kinship with this curious creature. “A lot of people say that an octopus is like an alien,” he notes. “But the strange thing is that, as you get closer to them, you realize that we’re very similar in a lot of ways.”

An octopus is a soft-bodied mollusk with a bulbous head and eight tentacles, studded with webbed, sticky suction cups. Essentially boneless, it can squeeze through very tight, narrow passages.

The octopus survives on a diet of fish, snails, birds, crabs and lobsters. In most cases, octopuses feed at night but they’ll often capture prey during the day when it crosses their path. Octopuses are carnivorous, meaning they only feed on meat.

It’s fascinating to see – for example – how this clever female octopus covers herself with an assortment of shells – an armoring/camouflaging device – and then outwits a predatory pyjama shark by riding on its back. Her creativity and intelligence are remarkable – enhanced by Kevin Smuts’ score.

Perhaps Foster’s identification of his personal catharsis as parallel to that of the octopus is a bit far-fetched but that’s understandable, given his obsession with her.

On the Granger Gauge of 1 to 10, My Octopus Teacher is an exotic, exquisite 8, a captivating documentary, streaming on Netflix.