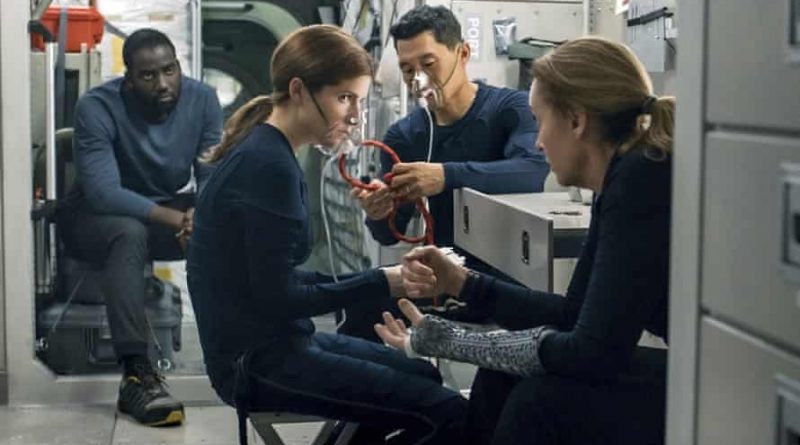 Not long after takeoff, they discover a terrified interloper, Michael (Shamier Anderson), a launch support engineer who was trapped in an overhead compartment. As his younger sister’s guardian, he’s distraught about abandoning her on Earth but then settles in, trying to help where he can although he’s not trained for the intricate maneuvers and scientific tasks they’re expected to perform.

Problem is: Michael’s presence inadvertently damaged a vital carbon dioxide scrubber, meaning that adding an unexpected fourth person, instead of the original three, will deplete their oxygen supply, endangering their survival on this long journey to the Mars colony.

“It’s the trolley problem,” Zoe says, referring to an ethical-thought experiment that poses the dilemma: Is it better to do nothing and let several people die or to kill an innocent person to save the others?

Eventually, despite warnings about radiation poisoning danger from solar flares, Zoe volunteers to climb a precarious tether to manually fill tanks of liquid oxygen from the launch vehicle.

Director Joe Penna, who penned the sketchy screenplay with his “Arctic” (2018) collaborator/editor, Ryan Morrison, sets up the man vs. nature plot as a philosophical dilemma within the confined, claustrophobic spaceship. But, despite some backstory monologues, we don’t know enough about the characters to develop an emotional attachment to them.

On the Granger Gauge of 1 to 10, “Stowaway” is a sparse, suspenseful if slow-paced 6, streaming on Netflix.