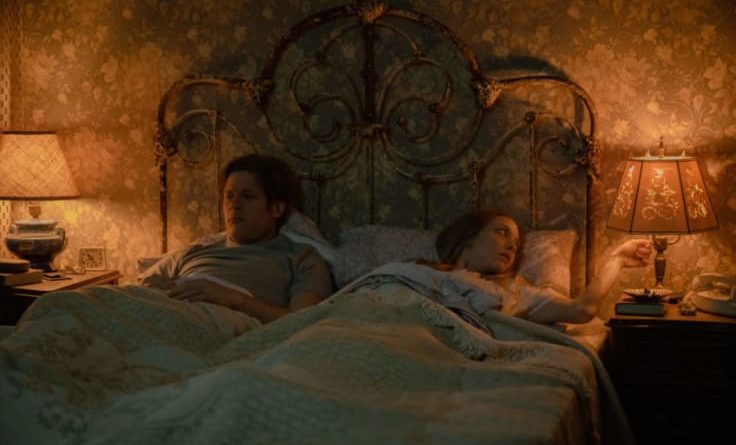 A smartly spooky movie in which the true monsters are all too real, husband-and-wife team Shari Springer Berman and Robert Pulcini’s (American Splendor) adaptation of Elizabeth Brundage’s All Things Cease to Appear, is driven by a haunting whose nature is tantalizing unclear: Is it the metaphorical specter of a marriage whose fissures and whirlpools lie beneath the carefully cultivated veneer of an enviable union of kindred souls? Or are there genuine supernatural forces at work, forces trapped within the bones of a superficially enchanting house in a small college town whose biggest selling point appears to be the lovely riverside location.

We meet Catherine and George Claire (Amanda Seyfried, James Norton), who’ve known each other since graduate school, at their farewell-to-NYC party, a mixture of polite bonhomie and restless undertones. Catherine has already started her career as an art restorer, but George’s new teaching post at a small liberal arts college requires relocation that guarantees she’ll have to go on hiatus while George amasses some professional bona fides. Any reservations her friends may have are met with her assertion that George has already made sacrifices on her behalf and now it’s her turn. And in any event, it will be nice for their little girl, Franny (Ana Sophia Heger), to have a nice big bedroom and a yard.

The town is lovely and the house a beauty, if a bit unloved; Catherine channels her artistic energy into restoring it while George plunges into the college scene which is–no surprise to anyone who knows anything about academia–a genteel swamp of professional ambition and personal backbiting, the dirty secret being that since money can’t serve as proof of value (nobody gets rich as a college professor) the currency is equal parts reputation, publication, popularity and proximity to power. Suffice it to say that some people negotiate the minefield better than others. George’s status seems a bit rocky; his strong suit is that he’s handsome in a slightly nerdy way that plays well to female students. Department-head Floyd DeBeers (F. Murray Abraham) is less impressed–he’s been in the game for a long, long time–but not a career killer, and offset by the fact that George’s dissertation came highly recommended and he is himself a genuinely talented painter. In fact, DeBeers is more taken with Catherine, who while restless and restless and sympathetic to the notion of transcendental, which DeBeers embraces and George rejects out of hand. That said, stress of trying to fit as a professor’s wife without entirely abandoning her own ambitions fuels Catherine’s long-standing eating disorder (she’s both anorexic and bulimic) and drives her to quietly challenge George’s efforts to take control for her own good.

And there’s much, much more: Things Heard & Seen is crammed with subtle character revelations, sly misdirection and hints of the supernatural; the word “hints” is crucial, because viewers looking for a flat-out horror film are bound to be disappointed. There are no weeping portraits, flying cutlery or ghostly voices booming “GET OUT” as candles gutter and the walls begin to bleed. What there is, however, is a nuanced portrait of a strained marriage whose underlying weaknesses are stressed by both the pressures of academia and pre-existing issues that remain unresolved as George and Catherine try, in essence, to paper over the walls as the foundation crumble. The film also benefits from excellent performances by Rhea Seehorn (best known from her ongoing role in Breaking Bad) and longtime indie-stalwart James Urbaniak as Justine and Bram, a local couple with counterculture sensibilities that are the strongest indicators (save a late-in-the-game bit of news heard on a car radio) that Brundage’s story is set in 1980 rather than 2021.