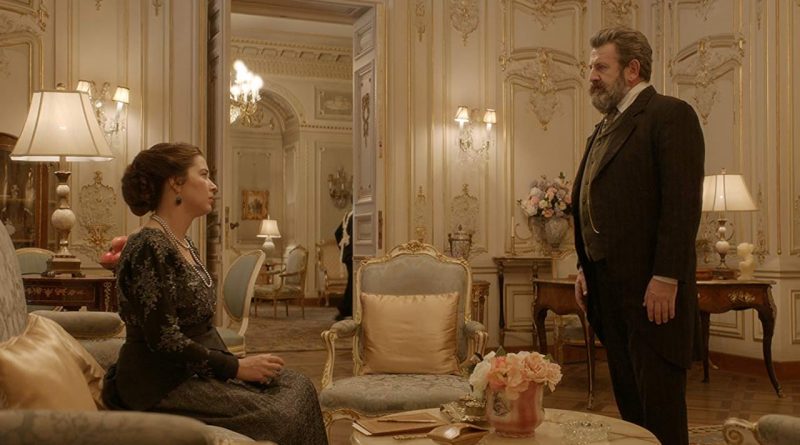 Even Dorothy Parker made jokes about being Queen of Romania:

“Oh, life is a glorious cycle of song,
a medley of extemporanea,
And love is a thing that can never go wrong,
and I am Marie of Romania.”

Why “Yeah, and I’m the Queen of Romania” became a punchline remains unknown, but it just might be because the last crowned queen of Romania was an outsized personality with mad diplomatic skills and a wild love life.

Queen Marie of Romania, from co-directors Alexis Cahill and Brigitte Drodtloff, focuses on a particular period in the royal’s life — just after World War I. Marie was instrumental in the country entering the war, and Romania took a beating in the conflict.

We meet Marie (Roxana Lupu) handing out bread to her starving subjects, mingling freely with the people in a way that worries her guard detail.

The next few scenes fill in some family life — her relationship with her husband, King Ferdinand (Daniel Plier), is weird, her oldest son Carol (Anghel Damian) is a bad apple who often needs collecting from low-rent relationships, and Marie herself seems to have boyfriends here and there.

The Queen’s big moment is her presence at the 1919 Paris Peace Conference, which is more or less the focus of this film.

The Parisians love Marie. Crowds gather wherever she goes. Her popularity is indicated by the floral arrangements that slowly but surely fill up her hotel suite in Paris.

She sets out to get recognition for Greater Romania, and that is achieved by — according to the film — her capacity for flirtation, crocodile tears, stern Queenly behaviour and an ability to impress world leaders by befriending their wives.

This is very staid storytelling, all talking heads and glacial pace. The film has lovely period detail and great costumes, but it’s not nearly enough to keep intense ennui at bay. Roxana Lupu is impressive as Marie, but all the other characters are little more than window dressing. Nothing much three-dimensional going on here.

The film has several odd scenes that don’t seem to add anything to the narrative. Marie’s visit to her cousin in England is a sort of meandering undertaking; likewise, we meet Canadian adventurer Joe Boyle (Robert Cavanah) in another scene, but the film discloses nothing of his relationship with Marie or the millions of dollars in relief funds he arranged for Romania. Weird.

Once home from Paris, triumphant over what her diplomacy had achieved, Marie is dissed by her son and husband for going away and is told her trip was unimportant. She leaves with her daughters and goes to Pelisor Castle to calm her spirits.

Her husband comes to the castle to tell her he loves her. Awww!

And oh yeah — he brings the news that the rest of the world has agreed to a unified and expanded Romania.

The film ends with actual footage of the coronation of Marie and Ferdinand in 1922, but with no mention made of just how lavish that ceremony was. Queen Marie had a pure gold crown fashioned for the occasion. Must have been heavy.

Queen Marie of Romania is a handy bit of hagiography and a dull undertaking that leaves out many fascinating details of the monarch’s life. She was a bit of a scandal magnet, but the film glosses over all that. Never mind.

The country Queen Marie worked so hard to unite was under a dictatorship — her lousy rotten son Carol — by 1938.

Queen Marie of Romania is in English, Romanian, French and German, with subtitles.