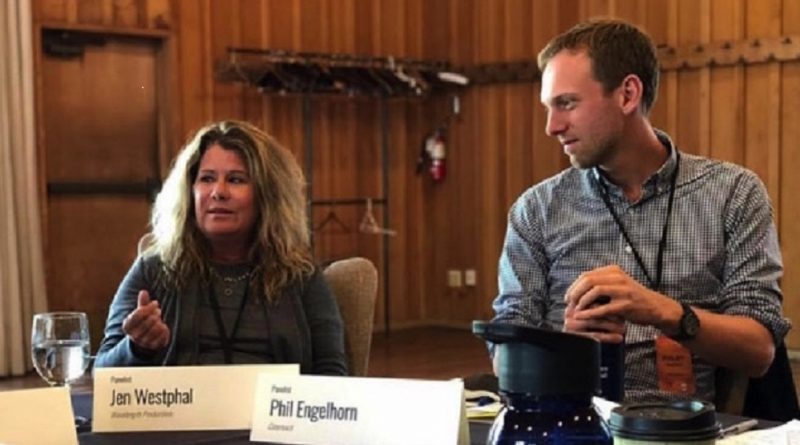 Six years ago, Jenifer Westphal was an empty-nester with the opportunity to forge a new path for herself. She raised three sons to adulthood, homeschooling all three — including one who was on the autism spectrum. Once the youngest had gone off to college, she looked around her empty house and said to her husband, “I’m going to start a film company.”

In 2015 she launched Wavelength Productions, a company that proudly proclaims to tell, “great f**king stories.” The company’s collection of documentary and narrative features includes an impressive variety. From Won’t You Be My Neighbor? to Farewell Amor, Westphal has produced and executive produced more than 30 films, with many more on the horizon.

Jenifer Westphal was in her 50s when she decided to make the leap to producing films. She launched Wavelength Productions with plans for a few specific documentaries including Unschooled, a film that followed three Philadelphia high school students taking part in a radical new education program. But she knew she couldn’t do this alone, as she recently explained. “I said to my husband, if we’re going to do these couple of films, we probably should meet some people in the industry.

That drove her to join the Catalyst Program through Sundance Institute. Catalyst connects filmmakers, mostly through the Sundance Institute Labs, with investors looking to support independent filmmaking. “It changed my life,” Westphal says.

She also joined forces with Joe Plummer, a producer who shared her commitment to lifting up underrepresented voices. Together, they were able to balance the work and focus on the parts they did best. For Westphal, that sometimes means getting very involved in the planning and preparation phase, particularly when it comes to documentaries and stories she knows very well.

But she also loves to learn. Teaming up with the likes of Morgan Neville, Nicholas Ma and Caryn Capotosta on Won’t You Be My Neighbor? was an exciting opportunity for the up-and-coming producer, and she wanted to make the most of it. She recalls saying, “Listen, I don’t know what I don’t know, so I’d love to learn from you guys.”

The first feature Wavelength helped usher into the world was Scotty and the Secret History of Hollywood, a documentary about the locally known gas station owner Scotty Bowers, who arranged particular favors for a clientele of Hollywood’s most elite. (A fictionalized version of Bowers’ story was part of Ryan Murphy’s 2020 miniseries Hollywood.)

Westphal continued to work in various levels of production, sometimes as an angel investor to help get a project finished, and sometimes with much deeper levels of involvement. In 2019, we met at the Sundance Film Festival where she was in attendance with two great docs, Where’s My Roy Cohn? and Knock Down the House. In the two years since, she has worked on Maybe Next Year, a documentary about the diehard, faithful fans of the Philadelphia Eagles; Feels Good Man, in which artist Matt Furie embarks on a quest to reclaim his iconic Pepe the Frog cartoon character; and Athlete A, a deep look inside the scandal that nearly broke US Gymnastics after years of covering up the crimes of abusive team doctor Larry Nassar.

Westphal also produced Farewell Amor, Ekwa Msangi’s beautiful narrative feature about an Angolan family reunited in New York after 17 years apart. This is one of several projects she is particularly proud of, having committed early on to promote and lift up the voices of women, and especially women of color. She recognizes her ability to reach out and support underprivileged creators, explaining, “I think it’s important at this point in time for a person like myself, and a lot of women in the film industry, to step back and say we’ve got to support our sisters of color. We just have to.”

Her talent for choosing fascinating and exciting projects, along with her boundless enthusiasm for celebrating great art, have helped drive her and her company forward. In the last two years, her films have been selected and awarded at festivals including Sundance, SXSW, and TIFF, and in November, Variety chose Jenifer Westphal as one of their 10 Producers to Watch. She has accomplished a lot in her half decade in the business, and it is exciting to imagine where she will choose to go next. Jenifer Westphal’s commitment is not to telling women’s stories but to giving women the opportunity to tell their own stories. That’s something many in the industry could learn from. She brought her first films to Sundance the year celebrities and studio heads were signing the 4% challenge, a move to get more female directors hired onto projects. Two years later, the 4% challenge is rarely spoken of and nearly forgotten. But not for Jenifer Westphal who continues to work hard to honor the spirit of that pledge and go beyond it. Of the projects produced or funded by Wavelength, more than 20 were directed by women, including Nanfu Wang and Jialing Zhang, Assia Boundaoui, Bonni Cohen, and Sarah Menzies. When it comes to working with women, her advice is, “Stop apologizing and just go for it.” She is a great example of what the industry could be and could do for marginalized voices and new, different, unique stories and storytelling styles. — Karen Peterson