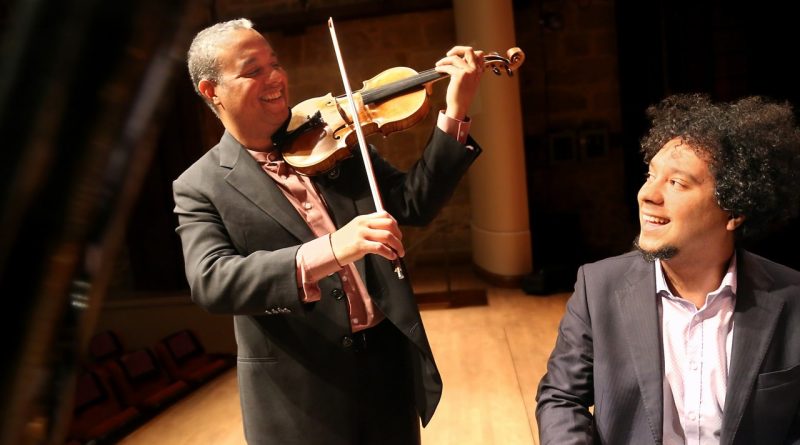 Music, they say, builds bridges. Musical careers, however, can build walls — or, in the case of the López-Gavilán brothers, make political walls slightly higher to climb.

Los Hermanos gives a brief overview of the brothers’ upbringings. Both brothers were born in Cuba. Older brother Ilmar, a prodigy at the violin, left Cuba as a teenager to study and perform internationally; he now lives in New York. Aldo, a pianist six years younger, stayed in Cuba, worked his way through the Cuban musical educational system, and now has a successful career as a classical and jazz pianist and composer. Due to strained relations between the US and Cuba, Aldo and Ilmar live as millions of Cuban-Americans and their families in Cuba do: living in countries that are only 90 miles apart, but seem light years away.

Directors Marcia Jarmel and Ken Schnieder trace three visits between the brothers: One, when Ilmar returns to Cuba; a second when Aldo travels to the US after US/Cuba relations begin to warm during the Obama administration for a nationwide tour with his brother, during which they’re allowed to play professionally together for the first time; and last, a complicated visit to the US in 2017, when embargoes and restrictions were re-tightened under the Trump administration. While politics is never the first topic of discussion between the brothers, it does simmer underneath—Aldo talks about the benefits of the government-owned bodegas that supply rationed food to Cubans, as well as his completely free education; Ilmar celebrates the cultural and economic freedom afforded to him in the US. It makes sense—Cuba has been good to Aldo, and he’s grateful. The US has been good to Ilmar, and he feels the same. While the film touches on these differences, they’re never insurmountable. The brothers, frankly, would rather get down to playing.

And when they do, it’s nothing short of magical. Jarmel and Schnieder smartly don’t try to add anything to the performance scenes—they know they have lightning in a bottle, and there’s no need to try to make it more electric. One scene does make it clear that it can be difficult to separate art and politics. During the US tour, the brothers play a Fourth of July concert in a picturesque town in New York (“it looks like Disneyland, the part where you first walk in and see Mickey,” says Ilmar. “I have no idea what you’re talking about,” says Aldo.) The finale is “The 1812 Overture,” which the guys watch from the audience. The patriotic tune, the people decked out in red, white, and blue, the flags flying—if a similar scene were filmed in Cuba, the political nature of it would be clear to American audiences. Here? Not so much. It’s just a Fourth of July party, after all.

Ultimately, Los Hermanos is a documentary about music and musicians, not about politics and politicians. The Lopez-Gavilan brothers are charismatic, warm subjects, and it’s a joy to get to know them. It’s easy to want to know more about their unusual circumstances—did (or does) Aldo resent his brother’s international opportunities? What did their dad, who is still living, think of the unusual situation? In the end, though, it was a smart, more honest choice to allow politics to remain an undercurrent—it’s there, it has an effect on what we see, but it’s not the most important thing. Just like all political systems, the real story of “Los Hermanos” is told through the words—and the music—of the people who live under them.