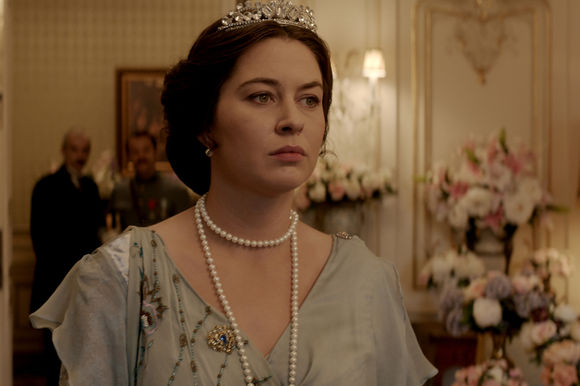 A common sarcasm to express disbelief is “Right. And I’m the Queen of Romania.”

Queen Marie of Romania, about a moment in the popular queen’s life, does not shed light on that idiom — or much clarity about Romania or World War I or the 1919 Peace Talks in Vienna or the queen herself.

Romania remained neutral for the first two years of the Great War before joining the Allied powers in 1916. The country’s king signed the Treaty of Bucharest in 1918, which caused considerable controversy. So Romania was largely ignored in the peace negotiations in Vienna.

King Ferdinand relented to Marie’s begging and dispatched her to Paris. Even though royals were not to take part in the peace talks, Marie traveled at great national expense to lobby for her bifurcated country to be joined and, thus, recognized as Greater Romania by the powers at the table. Georges Clemenceau, Prime Minister of France, and David Lloyd-George, Prime Minister of the United Kingdom, treated her with disdain. They hardly desired to deal with a woman or a royal, even one, she reminded Lloyd-George, whose grandmother was Queen Victoria.

Roxana Lupu plays the part of Queen Marie stiffly, corseted by costumes as much as by Brigitte Drodtloff and Maria-Denise Teodoru’s script. “Why am I not a man?” moans the queen. “What can you know of love?” asks her snotty son Carol. The dazzling costumes complement the tiaras. Regal settings of palaces and halls astound, especially contrasted with the devastation from war suffered by Romania and symbolized by Marie’s kind commitment to feed her hungry citizens.

Director Alexis Cahill tries to cover both Marie’s longing to unify her country as well as her quarreling family, but she succeeds in little more than showing contemporary cars, castles, and clothes. While all three are pretty neat to see, Queen Marie of Romania suffers from too much starch and too little nuance.