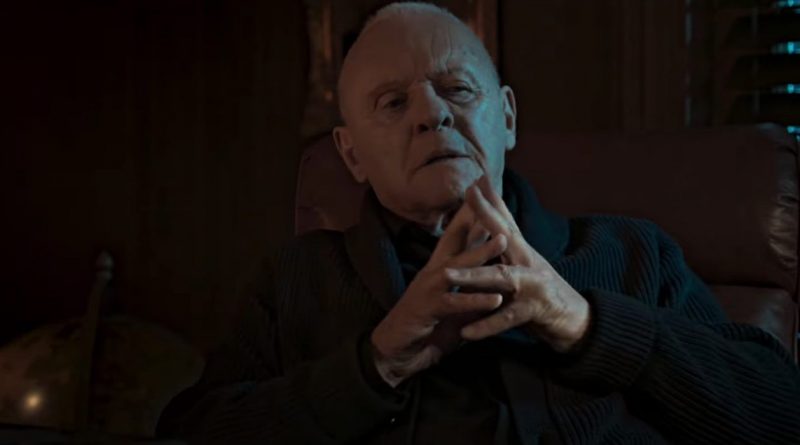 What a shame that – after winning the 2021 Best Actor Academy Award for The Father – Anthony Hopkins’ new neo-noir thriller is such a dud!

The titular character (Anson Mount) is a nameless contract killer, a methodical mercenary, who shows no remorse about the way he earns a living…until a woman, an innocent bystander, is burned to death in front of her young child. He knows it’s “collateral damage,” but the horror awakens his conscience.

And since he narrates the story in a monotone, it’s told entirely from the taciturn hitman’s point-of-view: “Perfection demands precision. Precision demands perserverance.”

When his Mentor (Anthony Hopkins) calls again, the assassin is dispatched to a small town in the middle of nowhere, looking for someone connected with the cryptic words “White Rivers.”

Having no idea who his quarry is, the Virtuoso waits for each of them to leave and then proceeds to target and track them down, hoping to discern the meaning and significance of “White Rivers.” At the same time, he begins to suffer from PTSD.

Working from a contrived, cliché-cluttered screenplay by James C. Wolf, it’s inconsistently directed by Nick Stagliano, who managed to attract a stellar cast to this mediocre material, filmed in a digital format.

Best known from TV’s Hell on Wheels and Star Trek: Discovery, Anson Mount is a stoically handsome but inherently enigmatic protagonist. Anthony Hopkins’ appearance is brief but he delivers a rambling, yet memorable graveside monologue about how he and The Virtuoso’s father participated in massacre of innocent children and civilians during the Vietnam War.

On the Granger Gauge of 1 to 10, The Virtuoso is a floundering 4, a waste of time and talent. Available at Redbox kiosks and streaming on Fandango Now, Vudu and Prime Video.