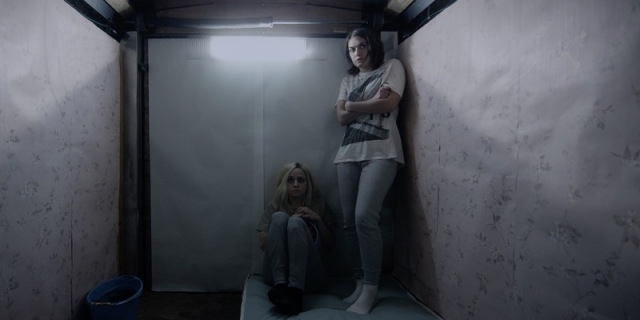 When a young woman, Phoebe (Juliette Alice Gobin), who has been kidnapped, runs into Dawn (Pamela Jayne Morgan), a driver for Nate’s Haul & Go movers, they’re on a desolate road in a state park. Frantic, Phoebe’s determined to escape from captivity – but that’s far more difficult than either woman anticipated.

As a recently widowed, long-haul trucker, Dawn’s exhausted and she’s not sure she really believes Phoebe’s seemingly far-fetched abduction story. But her phone is broken and she can’t find the keys to her rig.

Showing imaginative versatility, Todd Rawiszer certainly knows how to use the camera to amplify the chilling anxiety and suspense, while the pulse-pounding music augments these traumatized women’s ominous desperation.

The lighting – or lack of it – is far too dark, which is often frustrating to the viewer. That’s one of the reasons why when the stoners force Dawn to dump what’s probably a urine bottle on her head it does not resonate as it should, along with several other far-too-shadowy scenes.

Nevertheless, Rawiszer and Strand have successfully steered this low-budget, 96-minute horror/actioner with two, strong female protagonists through Dances With Films in Los Angeles, the Garden State Film Festival, and the Nightmares Film Festival, along with various other festivals throughout the country.

On the Granger Gauge of 1 to 10, Goodbye Honey is a creepy, survivalist 6, streaming on iTunes, Amazon, Google Play, YouTube Movies and Fandango Now.