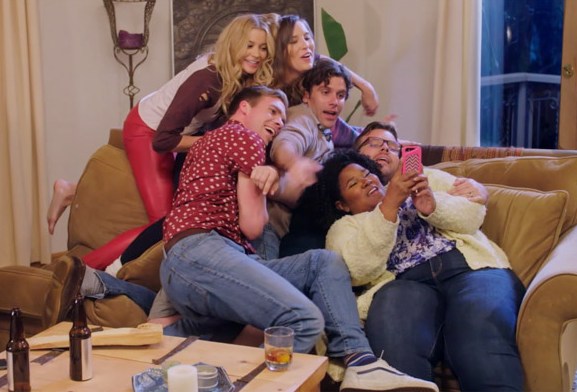 Honesty Weekend takes the reliable comedic recipe of tossing several couples together during a road trip or a vacation, a la The Four Seasons, The Big Chill, and Flirting with Disaster. Laughs and tough truths inevitably ensue. Here, writer-director Leslie Anne Thomas adds an intriguing layer: having one married couple in counseling swear to unflinching honesty.

Yet while the ensemble cast in Honesty Weekend meshes well overall, one character’s late arrival steers the film away from this promising setup into not-quite-madcap territory.

John (Evan Watkins, Happy Ending) and Ada (Natalie Ceballos, Diary of a Future President) are the stressed parents of a toddler who find the surprise in their relationship took off about “a kid and two mortgages ago.” Their marriage counselor (Allan Wasserman, Suburbicon) suggests they stop lying about little things to spare each other’s feelings, such as how she dislikes his Jeep and he gets annoyed when she adds blueberries to his oatmeal. Instead, he proposes that they be honest yet kind about the things that bother them for an entire weekend.

Ada and John object that they’re hosting guests over the weekend at his mother’s house, but the counselor insists. So the houseguests – each with issues of their own – wind up part of the honesty pact.

Making her feature debut, Thomas, a producer (Kevyn Aucoin: Beauty & the Beast in Me), introduces the group’s quirks and characters well. John’s college Harry (Adam Bartley, Longmire) and his wife, Stella (Dioni Michelle Collins, General Hospital), have a loving relationship, but Stella wants to have a baby. Meanwhile, the reluctant Harry loves hearing about the risqué love life of Nate (Pete Ploszek, Terminator: Dark Fate), their other college friend. Nate has a track record of dating flaky women, but he recently and secretly fell hard for someone new.

Although Ada and John have familiar complaints about each spending too much time at work, one huge issue is John’s friendship with Delaney (Sabina Gadecki, L.A.’s Finest). A lesbian, Delaney, grew up with John and now turns to him whenever she needs a shoulder to cry on. Ada already feels insecure about the space this free-spirited blonde takes up in her husband’s head and is none too thrilled to see Delaney arrive during the weekend, once again nursing heartache and bringing baggage.

For the first act or so, Honesty Weekend mingles drinking, drug use and sex talk with truths and witty dialogue. Any good getaway dramedy hinges on how long we can stand to be in an ensemble’s company, and the core cast here is quite likeable. Collins especially exudes genuine warmth and humor, whether she’s being frank with her onscreen husband or telling Ada not to care whether John has a lingering crush on Delaney because of where his heart lies.

But Delaney proves too much of a distraction. She’s meant to be a catalyst, but she isn’t as fully developed as the other characters and winds up feeling like a cliché. She also takes the focus away from Ada and John’s relationship. By the time John’s mother, Naomi (Susan Walters, Good Trouble), shows up to check on the group, there are more secrets in Honesty Weekend than revelations and tangents that might try viewers’ patience. Honesty Weekend starts off well, but by the end of its journey, its welcome wears thin.