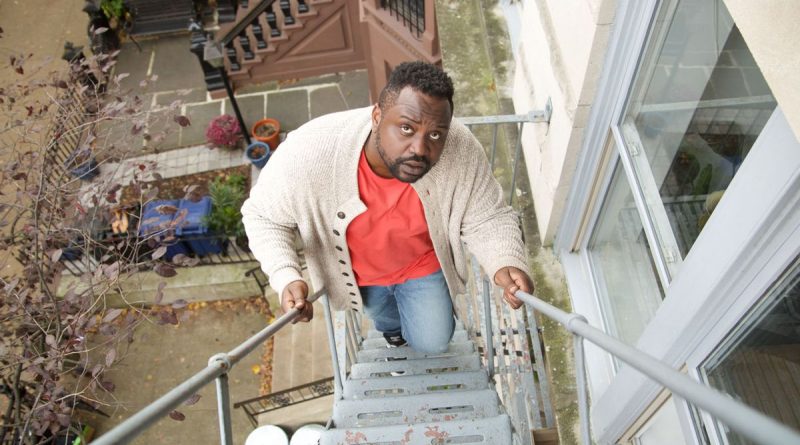 An gentle ensemble comedy-drama, The Outside Story is small movie with, yes, a big heart. And that’s a good thing. Brooklyn-based documentary filmmaker Charles (Brian Tyree Henry) has been in a serious rut since he split up with his girlfriend, lawyer Isha (Sonequa Martin-Green), whose belongings–packed in boxes scattered around the brownstone apartment–serve as constant reminders of her absence. Not that he needs one, because he can’t get her out of his head; memories of the night they met are on infinite. His next project is stalled, his remote day job–editing TCM “in memorium” videos for elderly and ailing actors–is depressing and he’s on the verge of becoming a shut-in; thanks to take-out delivery, Charles doesn’t even go out for food. And then fate steps in and gives him a rude shove: Charles runs downstairs in his socks to tip belated tip a royally pissed-off delivery man and leaves his keys behind in the apartment. He thinks he left the fire-escape window open and after disturbing his upstairs neighbor (Michael Cyril Creighton) who’s less than thrilled at having to postpone his dalliance with a charming Scandinavian couple–he climbs down to find that no, he didn’t. And so begins a day of trying to find his way home from the front stoop, during which Charles discovers that there are truly no strangers, just friends you haven’t met yet.

This kind of story can easily go wrong in oh-so many ways, but writer-director Casimir Nozkowski, a documentarian making his fiction-feature debut, pulls it off, with considerable assistance from a consistently strong cast, including Sunita Mani as a cop whose ferocious dedication to ticketing illegally parked cars lies lightly over a soft heart, Olivia Edward as a young piano prodigy and Maria Dizzia as her hard-drinking mother. And while cynics may grumble that almost everyone is just too nice to be true, long-time New Yorkers know that small apartment buildings are like small towns and neighbors are a generally on board to lend each other a hand. It’s an informal barter system; help with 4B’s jammed front-door key for feeding 5J’s cats over Labor Day weekend. The Outside Story is comfort food without being pablum, a small pleasure that richly deserves to find an audience.