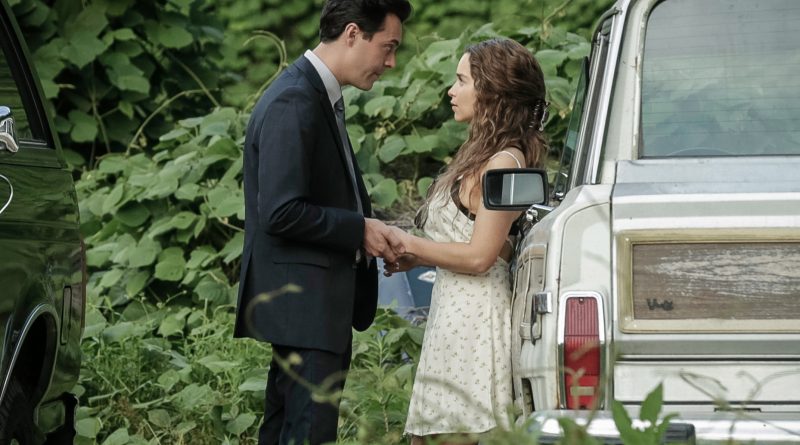 Set in Pikeville, Kentucky, this crime thriller is based on actual events that caused fear, loathing and revenge in rural Appalachia.

“You know what’s the worst thing about being dead? You have too much time to think,” muses Susan Smith (Emilia Clarke) as her from-the-grave voiceover teases the Southern Gothic saga about to unfold.

In 1988, Susan was living in a trailer park with her two children and abusive, drug-dealing ex-husband, Cash (Johnny Knoxville). Addicted to cocaine, she was about to be arrested as a welfare cheat, drawing checks from multiple states, when she spies handsome, clean-cut F.B.I. agent Mark Putnam, moving from Connecticut into her small town with his wife Kathy (Sophie Lowe) and infant daughter.

Eager for advancement within the Bureau, Putman was determined to catch a local thief who had already hit 11 banks in the area.

Grateful for the extra income and seeing an avenue for escape from the hardscrabble drudgery of her life, desperate, impetuous Susan is determined to seduce him, acting as his undercover ‘informant,’ helping him break several cases.

Not surprisingly, when their relationship turns sexual and he refuses to fulfill her naïve romantic fantasy, there are violent repercussions, since snitches are despised in the Kentucky hills. Eventually, guilt-riddled Putnam is arrested – the first time an F.B.I. agent was convicted of murder.

During the end credits, there are glimpses of the real people depicted, including Mark Putnam.

On the Granger Gauge of 1 to 10, Above Suspicion is a gritty, tawdry 5, available on DVD and online streaming.