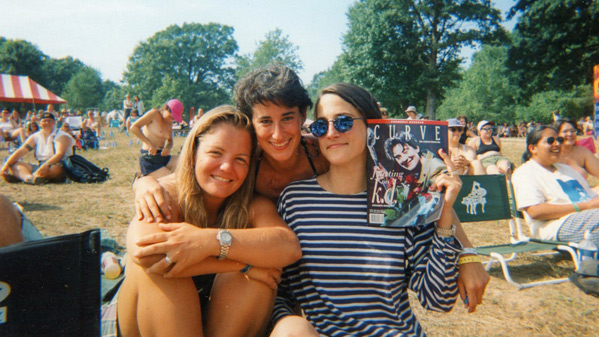 Ahead of the Curve, from co-directors Jen Rainin and Rivkah Beth Medow, is a smart and impressively comprehensive documentary covering the establishment and history of Curve Magazine (formerly known by the title Deneuve) and showing the Lesbian publication’s enormous impact on LGBTQ+ culture and lifestyle.

In addition to profiling Curve‘s dynamic and charismatic founder, Frances “Franco” Stevens, the film chronicles the Lesbian movement from the 1990s to the present, as it struggled — and continues to struggle — against persecution, discrimination and misunderstanding by making the Lesbian community, lifestyle and accomplishments highly visible.

Curve Magazine’s history is actually quite complex and fascinating, including editorial debates and strategies about whether or not to use the term ‘Lesbian’ on the cover, how to garner mainstream advertising, how to convince influential celebrities (including Melissa Etheridge and Lily Tomlin among many others) to ‘come out’ or just participate in its cover stories, and how to negotiate a stressful and very unpleasant legal battle with Catherine Deneuve over use of her name as its title — causing the magazine to change its name from Deneuve to Curve.

Franco, who founded the publication in 1900, suffered a debilitating accident in 1997 and she resigned from her leadership position at the magazine when it was sold to Avalon Media in 2010. After spending a decade in independent contemplation and LGBTQ+ activism with regard to ongoing and accelerating threats to all in the LGBTQ+ community, and to prevent the possible cessation of publication of Curve, Franco steps back into the picture to reaffirm the significance and influence of the magazine and to assure its continued life.