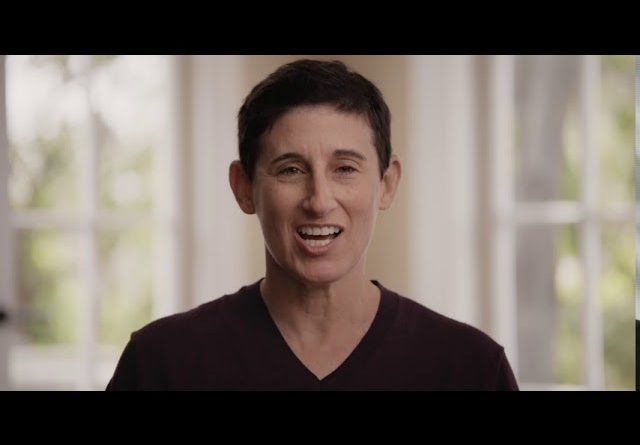 One of the better things that the briskly edited documentary Ahead of the Curve accomplishes is the way it charts how queer culture — and varied lesbian lifestyles in particular – have grown in acceptance since the ‘90s. Part of that change in attitudes in our society can be attributed to a gutsy woman named Franco Stevens. At the age of 23, her then-husband outed her to the shock of her family. Reduced to living in her car, Stevens hatched the idea of creating a glossy lifestyle lesbian magazine. With little to lose, she decided to rashly sign up for a series of credit cards and headed to the horse race track. Lady Luck was on her side and that was how Deneuve – now called Curve — was born.

The film is directed by first-time director Jen Rainin, who is Stevens’ wife. Their rapport on-screen during interviews doesn’t quite provide much personal detail – such as the fact that Stevens and her mother came to an understanding. She may have created the best-selling lesbian publication, but Stevens, who is now 53, has mobility issues and relies on an electric wheelchair and a service dog to get around.

Back in her more fearless days, she appeared on Geraldo Rivera’s talk show wearing short-cropped hair, a natty dark suit and flattering makeup for the camera. The topic? “Power dykes,” declares the host. But in her daily life, Stevens is seen in footage favoring sportier clothing or a skimpy bikini that showed off her shapely form. Deneuve was a lifestyle magazine that was designed to cater to a unique audience, with photos of queer females of varying backgrounds, cultures and ethnicities.

All was going great, until the French actress Catherine Deneuve – who famously shared a steamy lesbian love scene with Susan Sarandon in the 1983 vampire flick The Hunger — decided to sue the publication in 1995 for using her name without her permission. A fundraiser was held in San Francisco to raise money for legal fees. The case was settled and the magazine switched its name to Curve in 1996. Out tennis player Martina Navratilova was the magazine’s first “celesbian” to grace the cover. But 30 years ago, it was a big deal when such popular singers as k.d. lang and Melissa Etheridge agreed to be interviewed. Still, a clip from Rosie O’Donnell’s talk show with Ellen DeGeneres as guest has the gals over the fact that both are “Lebanese.” Since then, such entertainers as Tig Notaro, Lily Tomlin and the cast of TV’s The L Word have shown up in its pages.

These days, sexual orientation labels have become more complicated and lesbian doesn’t quite cover the self-identifying landscape anymore. And how many of us still shell out for magazine subscriptions when so many articles are free on line? Near the end of the doc, we learn that Stevens sold the magazine in 2010 to an Australian media company. But as a post-script not shared in the doc, Stevens decided to buy back Curve in April. Fresh issues will not hit newsstands any time soon. Instead, they will rely on their archive material quarterly. She and Rainin will be busy with their newly co-created The Curve Foundation, whose mission is to empower and amplify voices of the Curve community –lesbians, queer women, trans women and nonbinary people of all races, ages and abilities.