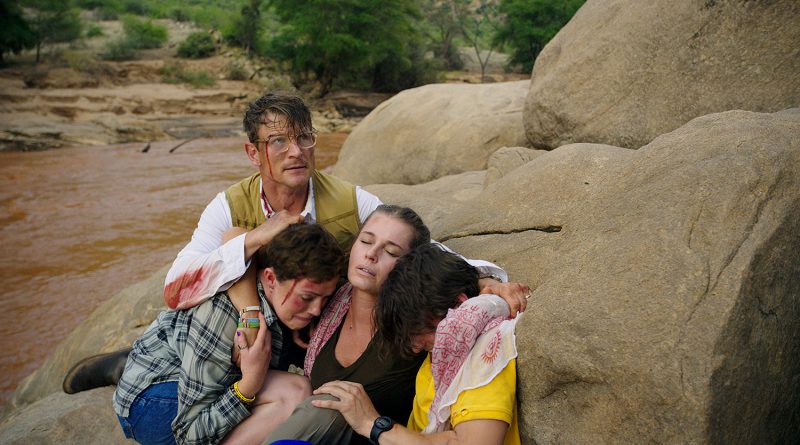 Be careful what you wish for. Because we all know what happens next: you’re gonna get it.

In 2020’s Rogue, stranded mercenaries on a mission to rescue a hostage from militants/poachers wind up confronting a rogue lion.

In 2021’s Endangered Species, an apparently affluent — but decidedly dysfunctional — American family visits East Kenya for a safari vacation, only to discover that they have more in common with the title animals than they imagine.

Not that Jack Halsey (frequent Bassett collaborator Philip Winchester), an uptight oil executive, is particularly pleased to be there. Unlike his wife Lauren (Rebecca Romijn), a doctor who’s wanted to visit Africa since she was a girl.

By the time they embark on their first adventure to Amboselli National Park, we’re already familiar with the problems, preoccupations and conflicts destined to disrupt their odyssey.

A short time later, everyone encounters another, more immediate disruption: an elusive rhinoceros and her adorable offspring. Alas, mama rhino doesn’t take kindly to anyone getting between her and her baby.

Thus begins Endangered Species’ narrative cycle: first acting, then action, then more (and more) of the same back-and-forth as our adventurers brave threats both animal — rhinos and leopards and hyenas, oh my! — and human. (The latter are exemplified by a band of — you guessed it — poachers, led by Romijn’s real-life husband, Jerry O’Connell, grinning like an overlit jack-o-lantern.)

Director Bassett (a former wildlife photographer whose credits include such TV workouts as Strike Back, Iron Fist and Ash vs. Evil Dead) stages the movie’s multiple action sequences with energetic punch.

In addition, she and director of photography Brendan Barnes ably showcase the movie’s natural setting, with sweeping panoramas that emphasize the characters’ isolation and vulnerability in a landscape both beautiful and unforgiving.

But it’s not nearly enough to compensate for the lockstep nature of the story — or the equally predictable characters trying to live through it.

But, to paraphrase that great cinematic sage Abraham Lincoln, for those of you who like this sort of thing, this is exactly the sort of thing you’ll like.