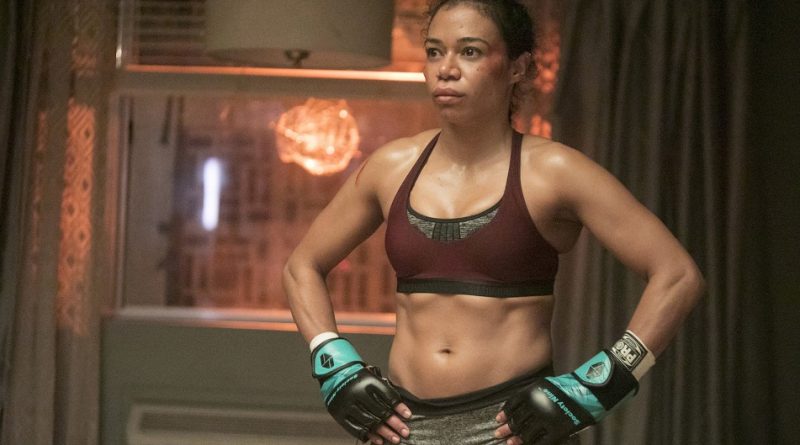 Producer-director Jeremy Norrie’s documentary isn’t the last word on the history and reality of female wrestling and clearly isn’t meant to be: It’s primarily a portrait of four wrestlers, representing two generations and with very different histories and relationships with the hybrid theatrical/sporting enterprise. But yes, his subjects address the eternal question: Is it real?

Wrestlers–male and female–have been, well, wrestling with that question for decades. And the film’s four wrestlers–women of different ages, backgrounds and at different stages of their careers–each offer a variation on quintessential Irish answer: It is and it isn’t. They’re not waffling: They’re willing to address the sport/art/entertainment’s fundamental contradiction, each drawing on her own experiences, starting with her first exposure to the popular spectacle.

Retired German-born wrestler Katrine Waters, “Temptress” in the ring, was reading Bravo, an entertainment magazine whose coverage focused on television and pop stars, did a feature about the much-publicized rivalry between Hulk Hogan and “Ultimate Warrior” James Hellwig; she recalls following their feud as though it were real, thrilled by its larger-than-life dimensions. Her contemporary, Shelly Martinez, loved the video for Cindy Lauper’s chirpy girl-power anthem Girls Just Want to Have Fun on MTV. Martinez admired that Lauper was both feminine and funky, “a wonder woman” and a girl who, yes, wanted to have fun.

The younger Shelly Martinez, who wrestles as “Keta Rush,” and her brother grew up watching wrestling on TV and mimicking its holds and moves. She discovered acting in high school, where it was a refuge from bullying, got into wrestling by happenstance: An audition mistake–she thought she was auditioning for a TV series but wound up at a pro-wrestling try out; impressed by the athleticism and encouraged by her father–who felt it might help her overcome her anxiety issues–accepted an invitation to a call back. Sarah-Jean Greaves–aka “Delilah Doom”–watched wrestling at her best friend’s house because her own family wasn’t into it. The Glamazonian wrestler-model-bodybuilder Chyna, modestly ballyhooed as “The Ninth Wonder of the World,” was Greaves’ badass inspiration; Greaves loved both theater and sports and wrestling was both.

And then there was G.L.O.W.–Glamorous Ladies of Wrestling–whose twin pillars were women kicking butt and going to the mat just like guys, and women looking, well, glamorous, made up and well-coiffed. “They were part of something,” says Martinez, and they were. G.L.O.W. both gave female wrestlers increasingly theatrical opportunities to develop their in-ring characters and participate in a kind of long-arc storytelling–hence the lengthy feuds and rivalries that kept fans coming back with the reassurance that the “heels” never won for long. It isn’t “fake”–it’s a performance; as one of them observes, you wouldn’t call movies “fake” because the actors whose characters die on the screen don’t die in real life. And wrestling is a performance that demands serious training and all-in: There are no stand-ins. It requires an ongoing commitment both to maintaining both a high level of athleticism and respecting the illusion that fans embrace.

Without saying it in so many words, all the women posit wrestling as a feminist endeavor, a physically demanding performance that covertly addresses the hard reality that life isn’t fair by using the spectacle of athletic, disciplined women in sexy costumes embracing anger, frustration and the acquisition of power in an impressively physical way, literally putting their bodies on the line.