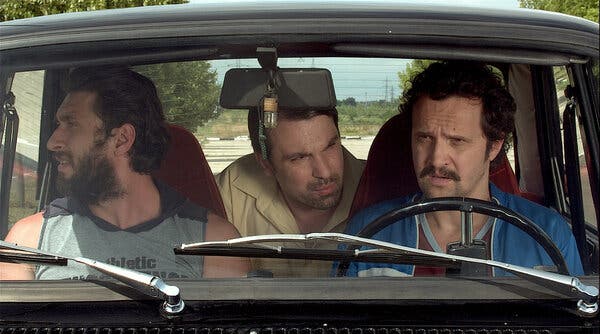 In a provincial Romanian town, three middle-aged friends needing money buy, as the film’s title announces, Two Lottery Tickets. When they win six million Euros, their elation is squelched when Dinel, keeper of the precious ticket, reveals it was in his bumbag, as he calls his fanny pack, taken by two thieves who confronted Dinel as he retrieved his mail.

No spoiler there because this occurs in very early scenes, with the film devoted to the search for these Bucharest thieves. The most desperate, Dinel needs money to, possibly, reunite with his wife who has either run off with her boss or has been kidnapped with a ransom demanded for her return from Italy.

Romanian writer/director Paul Negoescu keeps the action unexpectedly low-key but invariably amusing, with several laugh-out loud encounters, especially one late in the film with a policeman asking about the color of Dinel’s car. Along the way, this nicely differentiated, bumbling trio reveals a lot about themselves amidst a stinging social critique. For example, they express profound distrust of the police; they believe in rampant government corruption; they think the mafia controls just about everything; and, unappealingly, one utters a couple antisemitic comments.

The actors well known in Romania, who play car mechanic Dinel, carpenter Sile, and civil servant Pompiliu, convey the ease and honesty of comfortable buddies who get together regularly to drink and watch sports in a local café. Together they interview Dinel’s zany assortment of apartment neighbors, including a fortune teller, two sex workers, a very young girl, and stoner drug dealers. A road trip to Bucharest follows with equally bizarre events, one including a hitchhiker. The cramped car shots heighten the ironic comedy with the enclosed space forcing increasingly uncomfortable interaction.

The camera stays out of the way, relying primarily on long takes from a fixed position, thereby keeping the focus properly on the characters. The music and art direction are similarly unintrusive and entirely supportive of the moods. As the cliché goes, dying is easy, comedy is hard. In Two Lottery Tickets, Negoescu’s light touch makes it look effortless in this laid-back update of Ion Luca Caragiale’s 1901 short story.