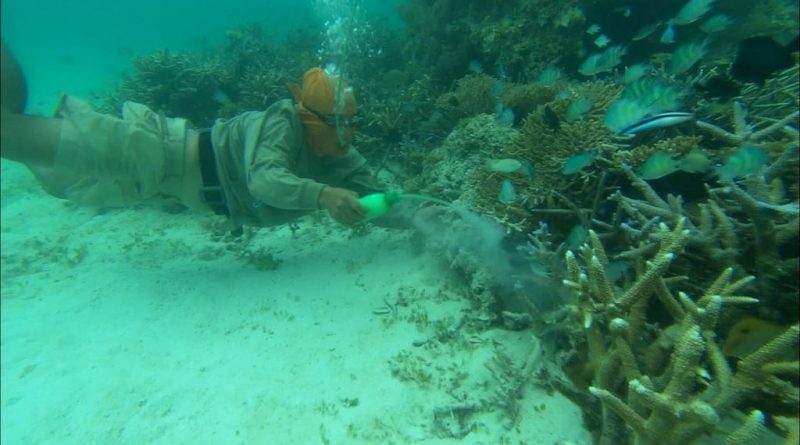 In case you didn’t have enough to worry about, you can now add the torturing of fish to your list.

Paula Fouce’s powerful documentary, The Dark Hobby, literally goes below the surface to explore the world of aquarium collectors. If you haven’t heard of this before, you’re not alone, but once you’ve watched the movie, you’ll never look at a fish tank the same way again.

It turns out that those home aquariums filled with gorgeous fish have a dirty secret: those fish have been dynamited or cyanided from their homes on the world’s reefs, traumatizing them and destroying the fragile eco-system.

It’s a $4 billion industry so, despite the fact that it’s illegal, basically murder since 99% of the fish die within one year of being captured, and devastating to our environment, you know that the collectors aren’t going to give up without a fight. In fact, they’ve gone so far as to actually attack activists.

Fouce grounds her film on Hawaii’s Gold Coast, considered “ground zero” for the industry. Home to 25 major reef fish dealers, it’s where “people from all over come to take our fish,” says Robert Wintner, aka “Snorkel Bob,” a long-time activist who has been trying to ban aquarium collecting for more than a decade.

As someone on the frontline of this fight, Wintner offers extensive insight into the trade. We also hear from legislators, elders and scientists, who teach us that, contrary to popular belief – and wishful thinking – fish experience pain and pleasure, they talk and sing to each other and they’ve passed intelligence tests. They even form friendships, a la My Octopus Teacher.

The only thing they don’t do, says one activist, is scream out loud the way mammals do. So it’s up to us to scream for them.

And when you see what happens to them when they’re captured, you will have no trouble doing that.

The Dark Hobby is short – it’s just a little over an hour – and to the point. It doesn’t present two sides of the story because there is no “other side.” Decorating with living beings at the expense of both the animals and the planet? There is no defense. Want a beautiful aquarium in your home so you can look at colorful fish all day? Buy a big screen TV and stream one of the many ocean webcams available.

Fouce has created a fascinating, eye-opening documentary which will remind you that fish are living creatures and make you outraged enough to never again keep even a goldfish captive in a little glass bowl. Once you’ve watched this documentary, you can’t ignore the facts, and that’s what makes The Dark Hobby so important. As Oprah always says, “When you know better, you do better.”