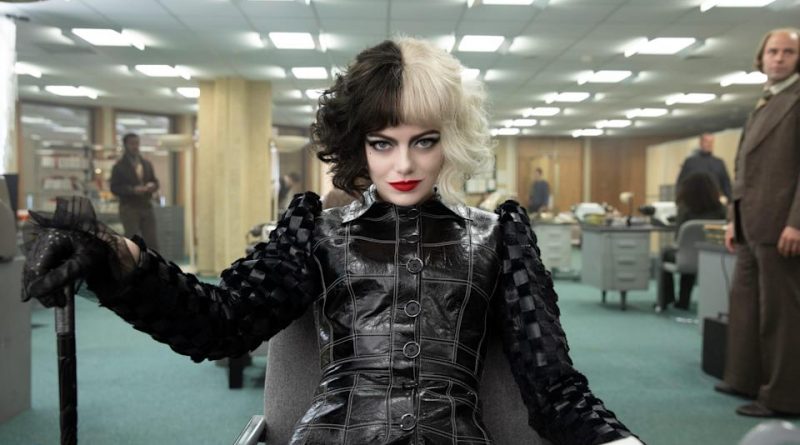 I have been disgruntled by how Disney complacently keeps recycling its past cartoon hits with remakes semi-live-action remakes, TV series, Broadway shows and, yes, backstories. But the makers of Cruella are actually upcycling this material in fresh and clever ways.

The 1996 live-action remake starring a perfectly cast Glenn Close, who is an executive producer on Cruella, relished her role as the elder Cruella De Vil. But the real-life dogs didn’t have as much personality as the cartoon versions and were more more bark than bite as it were. Close also showed up in the inferior 2000 sequel, 102 Dalmatians.

But times have changed and this back story of one the most popular House of Mouse baddies pits two hellishly fierce female Oscar winners against one another in a bitch match made in diva heaven. Emma Stone revels in her dual personalities as the low-key though sneaky red-wig-donning Estella by day and the out-of-nowhere, rule-breaking rabble-rouser Cruella as she lets down her own two-tone hair at night.

Meanwhile, Emma Thompson is Baroness von Hellman a haughty queen who rules a fashion house. She fears being upstaged by this mysterious young up-and-comer who puts on pop-up walkway shows. Yes, social media already has dubbed this macabre crime comedy “The De Vil Wears Prada” and rightfully so since one of the contributors to the story is Aline Brosh McKenna, who created Meryl Streep’s imperious fashion mag maven Miranda Priestly. Meanwhile, fellow scribe Kelly Marcel molded Thompson’s cantankerous and ill-humored author P.L. Travers, who caused headaches for the makers of the 1964’s Disney classic Mary Poppins in Saving Mr. Banks.

The selection of Craig Gillespie of I, Tonya fame is also spot-on. He certainly knows how to capture a toxic relationship between a talented young female caught in a toxic relationship with an older woman, which resulted in a supporting Oscar for Alison Janney as ice skater Tonya Harding’s abusive mother. As for the screenwriters, Tony McNamara (The Favourite) has proven he knows how to capture female movie rivals.

Rarely do I describe such so-called family entertainment as edgy, but whoever decided to set the story in ‘70s-era London just as the punk scene took hold of the fashion and music scene is a genius. Cruella is also a jukebox musical of sorts with snippets of hummable tunes, ranging from Time of the Season by the Zombies and These Boots Are Made for Walkin’ by Nancy Sinatra to Blondie’s One Way or Another and the Clash’s Should I Stay or Should I Go. This is also only the second PG-13 given to a Disney live-action remake after Mulan.

Stone and Thompson aren’t the only performers onscreen who make an impression. The expelled schoolgirl Estella (spunky young spitfire Tipper Seifert-Cleveland) arrives in London alone and penniless after her mother dies in an accident. She meets the two grifters who indulge in petty crimes, Horace and Jasper, who also were characters in the cartoon. While actor Paul Fry is fine as Jasper, it is Paul Walter Hauser as Horace who proves to be constantly amusing both physically and vocally. As for the four-legged scene stealers, it is hard not to adore the little one-eye dog called Wink, who wears a pirate patch and is able to trick humans into thinking he is a rat.

As for the below-the line talent, production designer Fiona Crombie and set director Alice Felton, who both worked on The Favourite, do a bang-up job both on stages and actual locales. As for the costume designs, eat your heart out Project Runway. I can’t help but think that 80-year-old Vivienne Westwood, who basically created the punk and new wave fashion aesthetic, would be happy to see her legacy live on like this.

If there is a flaw with Cruella, it drags on a bit too long – 134 minutes to be exact. But a scene late in the game suggests there might be more to come. If Stone and Thompson are willing to give it a go again, I wouldn’t be unhappy.