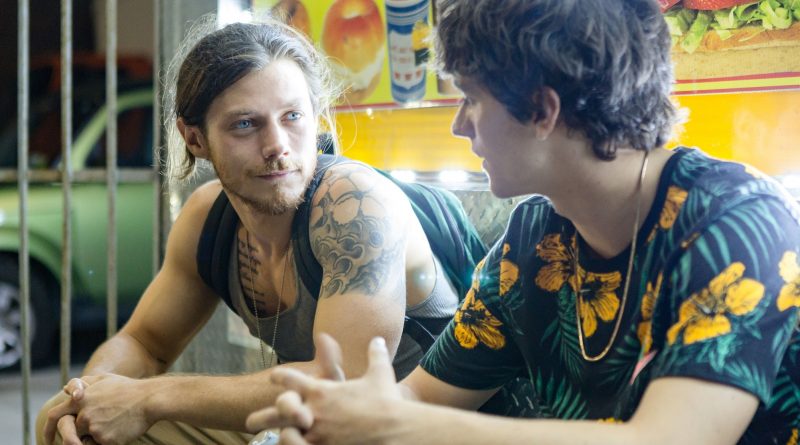 In Port Authority, writer-director Danielle Lessovitz weaves a tender story of love, family, and self-discovery around a white youth unable to express himself and a black trans woman who only wants honesty.

Twenty-year-old Paul (Fionn Whitehead, Dunkirk) arrives at New York City’s Port Authority Bus Terminal from Pittsburgh, aiming for a fresh start. After fighting off a couple of guys who try to steal his phone on the subway, he falls in with Lee (McCaul Lombardi, American Honey), who takes Paul to a shelter. Not simply philanthropic, Lee also sizes up Paul as another laborer for his moving business, which is really a shakedown. Their unseen boss sends Lee’s crew to apartments with residents who usually are people of color to demand cash for unpaid fees or evict them on the spot.

Paul, who is on probation and estranged from his family, yearns for connection. One night at the shelter, he notices Tekay (Devon Carpenter) practicing dance moves in the stairwell. Soon, Tekay slips out of the shelter, and a curious Paul follows. He stumbles into the kiki ballroom scene, a close-knit LGBTQ+ community that supports performance and queer culture.

Paul isn’t gay, but he’s drawn to how relaxed yet raucous everyone is, their dancing expansive and free. One attendee doesn’t like an outsider here, though. That whole city is for you, he tells Paul. This is for us.

As Paul leaves, Wye (Leyna Bloom) apologizes for her brother’s rudeness. She’s so open, gentle, and kind, as if she senses a lost soul like she used to be. Paul buys her pizza, and she invites him to return to watch her rehearse. They’re both surprised yet delighted when he does.

Executive produced by Martin Scorsese, Port Authority captures not only the sweetness of Paul and Wye’s growing intimacy but those intimate spaces that people who love the city recognize. The film, like New York, has pockets of friendship, family, and experiences that enclose Paul with safety and care. He falls in love both with Wye and her chosen family. They live with their “house mother,” Mother McQueen (Christopher “Afrika” Quarles), who urges them to own every inch of their space in performance as much as in life. Meanwhile, Lee’s crew has targeted McQueen’s apartment for eviction.

Cinematographer Jomo Fray (Selah and the Spades) bathes the ballroom scenes and some of Wye and Paul’s moments in blues and reds, as if emphasizing the energy that the vivacious Wye and her family bring to Paul’s life. Lessovitz, a writer on Mobile Homes making her feature directing debut, frames the dancing almost like a documentary, conveying Paul’s respect and wonder.

Paul doesn’t dance beyond jerking moves on a dance pad in an arcade. He admires how comfortable Wye and her family are in their posture, their movements, even their laughter. Whitehead shows him blossom around them compared to how guarded he is around Lee. Paul doesn’t know how to act like a man except by lashing out with his fists when he feels emotions he doesn’t understand. His body tenses when Lee tells a random girl to keep him company or slings gay slurs at the moving crew.

In a lesser film, Wye would be a manic pixie dream girl who exists solely to help Paul heal, but Lessovitz and Bloom, a transgender model and dancer making her film debut, give Wye plenty of agency. Her family is vital to her, an oasis in a world that often doesn’t acknowledge or understand her. She’s radiant. Sometimes, she tells Paul, she dances by herself, imagining that she’s taking back the space that the world doesn’t give her.

Lessovitz frames them in closeups and medium shots, unfolding their relationship through light banter and delicate gestures, such as Wye sharing her nicotine patch after declining his offer of a cigarette. Lessovitz also refreshingly doesn’t make Wye being trans the driving conflict. Paul is shocked at first, wondering what others will think, and Wye calls him out on such nonsense. Their feelings are genuine, and they quickly reconnect, but his dishonesty about his homelessness and his line of work threaten to drive them apart.

Narratively, Port Authority leaves several loose ends, but it satisfies as a heartfelt romance and character study. As Wye and Paul grow closer, his facade falls away to reveal what he calls “white boy realness.” Paul isn’t sure what that looks like, he says, but he’s trying to get there.